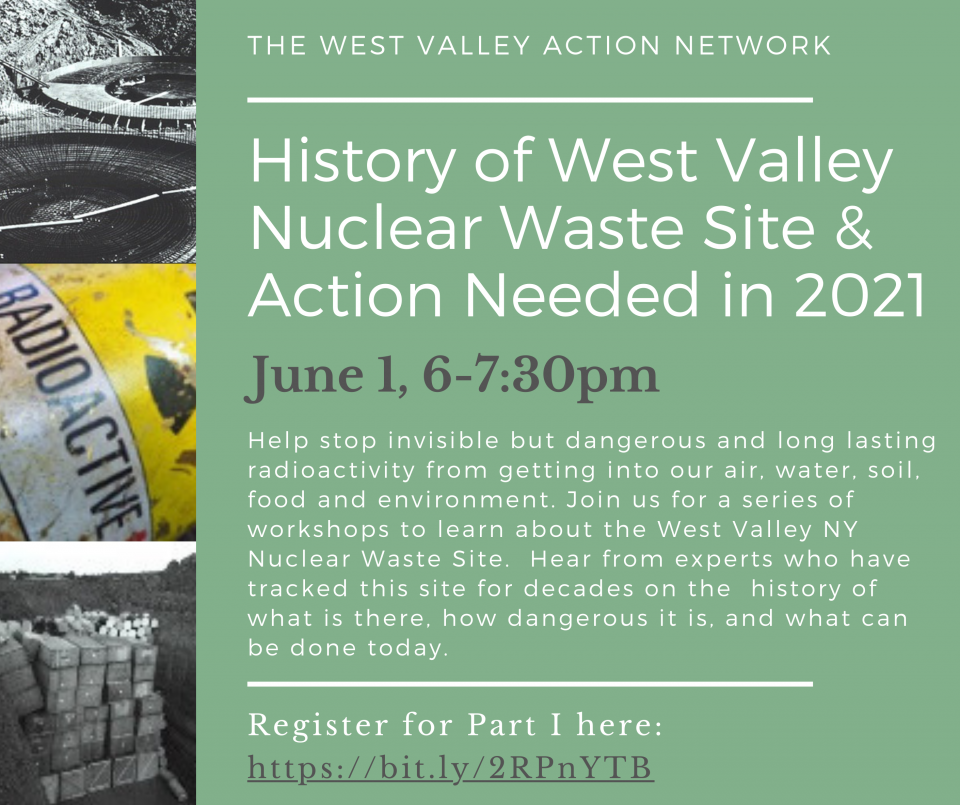 The first two programs in the series will give the history of what's there, what was done, how dangerous it is from experts who have tracked the site for decades.

Join the West Valley Action Network in a 6 month series of ZOOM meetings to learn about one of the most radioactive waste sites in the country, here in Western NY.

Raymond C. Vaughan, Ph.D., P.G., is a professional geologist and environmental scientist in Buffalo. Earlier in his career, he worked for 33 years in research and development labs in Niagara Falls and Buffalo, then from 2000 to 2012 as an environmental scientist in the NYS Attorney General’s Office where he worked on limiting mercury emissions, protecting the Great Lakes, and many other issues. Ray has a longstanding interest in nuclear waste cleanup and environmental protection. He has served since 1997 on the West Valley Citizen Task Force, which advises the state and federal agencies that are cleaning up the nuclear waste site at West Valley, N.Y. From 1978 to 2006 he was a member of the Steering Committee of the Coalition on West Valley Nuclear Wastes. He served on the Town of Hamburg Conservation Advisory Board from 1980 to 1999 and has served on nonprofit boards, including the Western New York Land Conservancy from 1991 to 2002 and the Nature Sanctuary Society of WNY from 2013 to present. He has a wide range of interests, including WNY history—on which he has presented at conferences in Buffalo, Lewiston, and Edinburgh, Scotland—and enjoys canoeing, hiking, sailing, and other outdoor activities.

Diane D'Arrigo is the Radioactive Waste Project Director at Nuclear Information and Resource Service (NIRS). She has degrees in chemistry and environmental studies and work history in analytical and organic chemistry with a focus on the pollutants in the Great Lakes. She worked for the Sierra Club Radioactive Waste Campaign based in Buffalo from 1980 to 1984 and as a community organizer and researcher at other public interest and environmental groups. Starting with the West Valley nuclear waste site, she has closely tracked nuclear waste issues for decades, including high level and so-called "low-level" commercial and weapons waste. She has repeatedly challenged unnecessary nuclear waste transport including over the Peace Bridge and has coordinated national and international opposition to deregulating nuclear waste that would allow it to be dumped as regular trash or made into everyday household items.