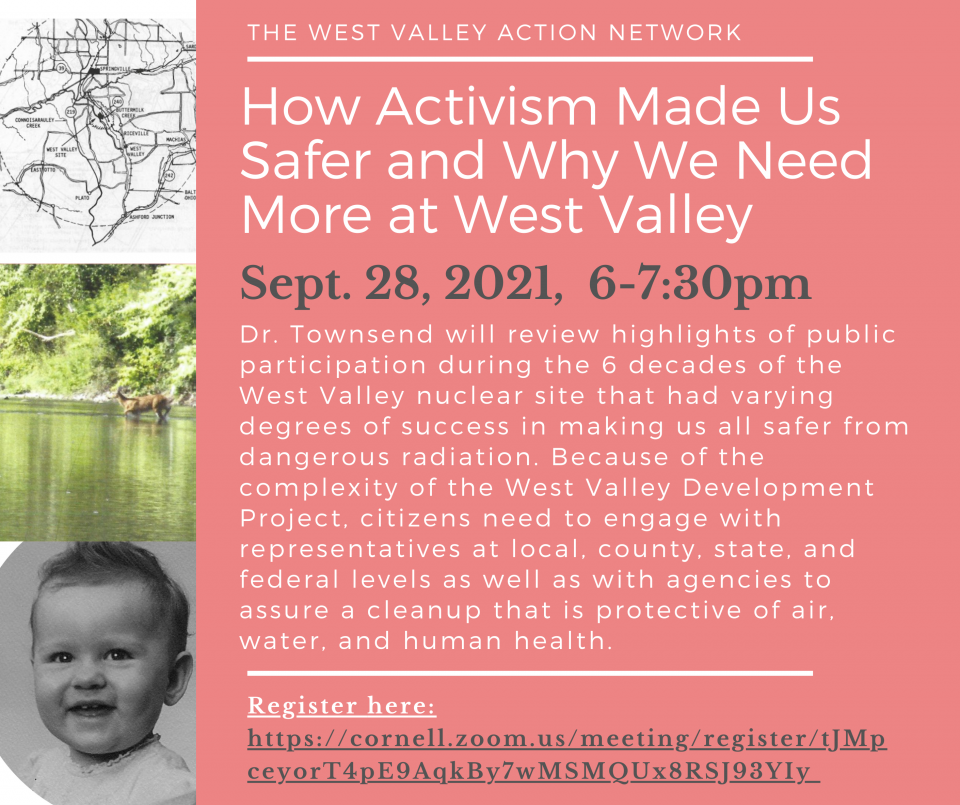 This is the sixth workshop in a series hosted by the The West Valley Action Network.

This workshop features Patricia K. Townsend, Ph. D. From her perspective as a social scientist, Dr. Townsend will review highlights of public participation during the six decades of the West Valley nuclear site that had varying degrees of success in making us all safer from dangerous radiation.

Individuals from many walks of life brought their different skills to bear on the challenging decisions of how to proceed in the work of remediating the highly polluted site. Some of those you have heard during this series of programs have been engaged for more than 40 years, others have a newly acquired passion for activism to help protect the Great Lakes region for our descendants.

Because of the political and bureaucratic complexity of the West Valley Development Project, citizens need to be engaged with their representatives at local, county, state, and federal levels as well as with agencies to assure a cleanup that is protective of air, water, and human health.

View other workshops from this series:

Patricia K. Townsend, Ph. D., is an environmental and medical anthropologist who authored or co-authored multiple editions of college textbooks in both fields. Her early fieldwork as a cultural anthropologist was in the tropical forests of Papua New Guinea, with her husband Bill Townsend, a civil engineer.  A subsequent research project took her to Superfund sites in Montana, Tennessee, and Love Canal. Since retirement, Pat has devoted much of her volunteer time to West Valley nuclear concerns through her connections with several organizations, including the West Valley Citizen Task Force, the Buffalo-Niagara League of Women Voters, the anthropology department at the University at Buffalo, New York Interfaith Power and Light, the Western New York Interfaith Climate Justice Community, and Presbyterian Women of WNY.