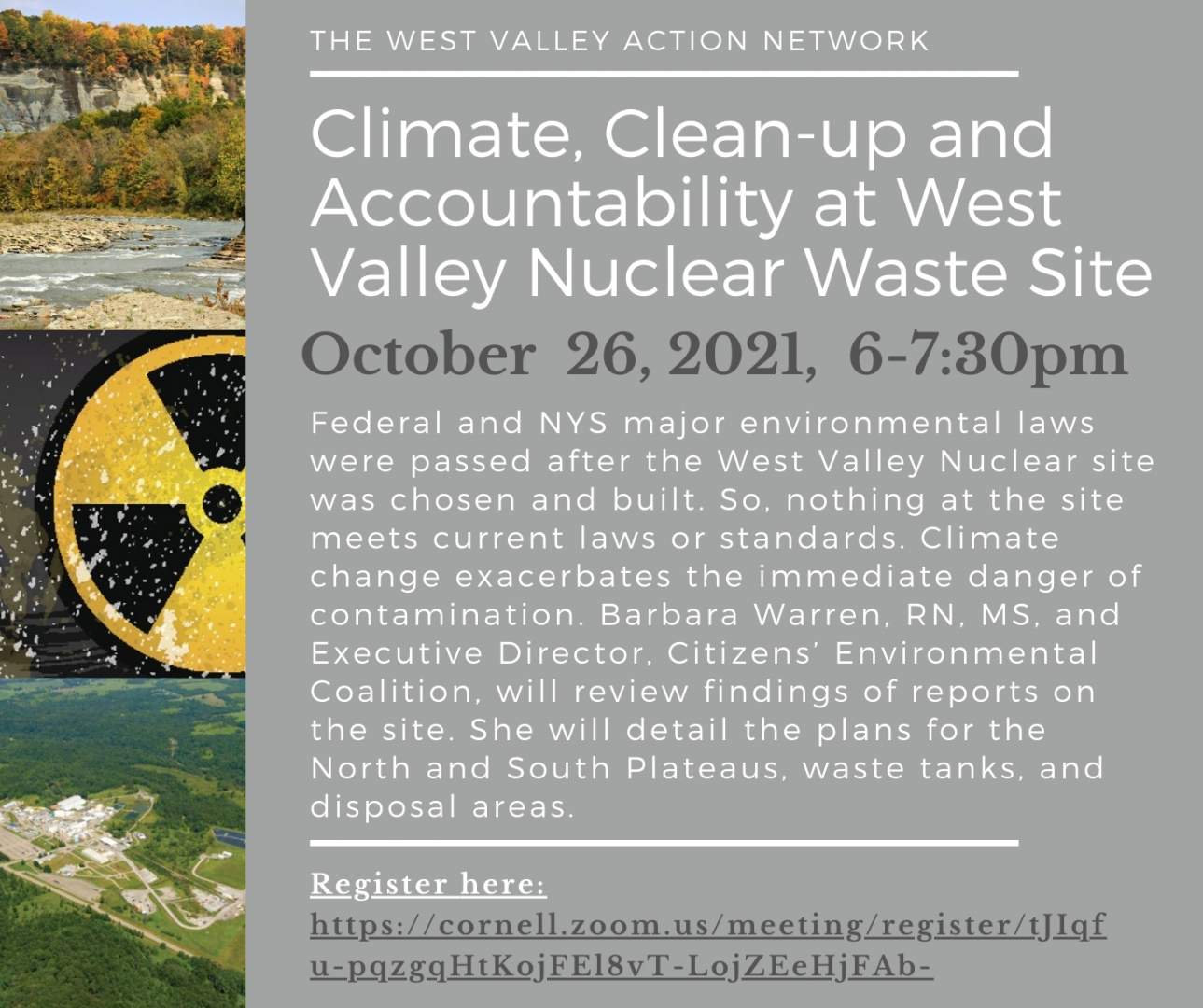 Climate, Clean-up and Accountability at the West Valley Nuclear Waste Site in 2021

The workshop, the sixth and final one in the series, Climate, Clean-up and Accountability at the West Valley Nuclear Waste Site in 2021 will be held virtually, is free and is open to the public.  Federal and NYS major environmental laws were passed years after the West Valley Nuclear site was chosen and built. So, nothing at the site meets current environmental laws or standards. Now climate change threatens to exacerbate the immediate danger of contamination. Barbara Warren, RN, MS, and Executive Director, Citizens’ Environmental Coalition, will review findings of reports on the site. She will detail the plans for the North and South Plateaus, waste tanks, and disposal areas.

Where are we? What work still must be done? Could climate impacts release radioactive wastes?

What contamination is on site? The Presentation will review the Entire Site and the various sources of contamination.

We will review the Plans presented in 2010 for Phase I & 2 and the progress and difficulties since then.

Climate Change is having more profound impacts than we expected in 2010 and how the site might be impacted.

The planned Supplemental Environmental Impact Statement (SEIS) being prepared by the US Dept of Energy and the NYS Energy Research and Development Authority for 2022 will review Phase 2 Final Plans for remediation and cleanup of the entire site. A key problem is that a significant amount of Phase I work has not been completed, potentially impacting final plans.

View other workshops from this series:

Barbara Warren RN, MS in Environmental Health Science. Beyond her nursing employment in hospitals, she led training programs for the NJ Dept of Health, the Consumers Union (publisher of Consumer Reports) and more. She prepared a report on NYC Potential for Toxic Chemical Accidents which resulted in a new NYC law with requirements geared to reducing the quantities of dangerous chemicals at facilities and having proper storage.

She worked to defeat Garbage Incineration in NYC, promoted increased recycling of solid waste over many years with the Citywide Recycling Advisory Board and was involved in closing the Fresh Kills landfill on Staten Island, the largest in the world at the time.