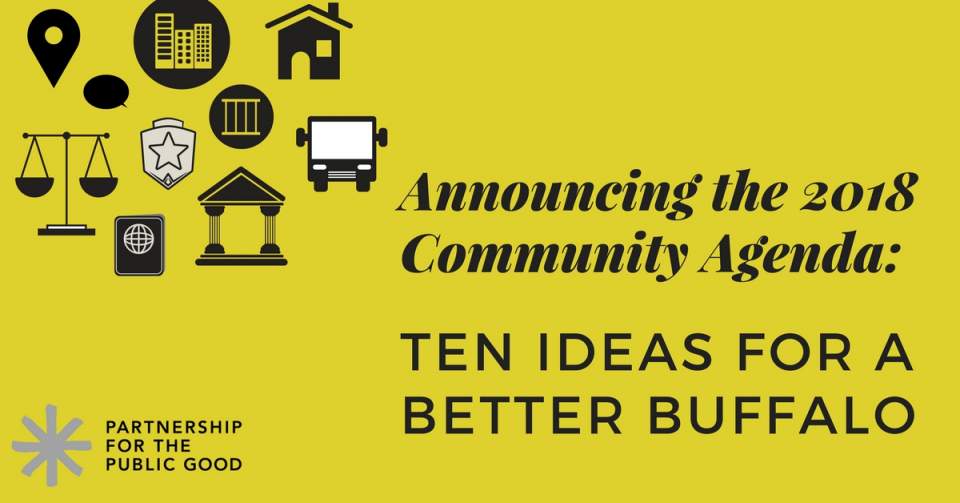 The Partnership for the Public Good (PPG) unites 276 community groups working for a better Buffalo – ranging from large social service agencies like the YWCA to neighborhood groups like the Masten Block Club Coalition, from arts organizations like El Museo to environmental advocates like the Crossroads Collective.

Each fall PPG leads a democratic process among its partners to determine the Community Agenda for the coming year. This year’s Agenda addresses important topics such as the reform of solitary confinement in Erie County, certifying Buffalo as a “Welcoming City,” investing in the Fruit Belt Community Land Trust, and making the NFTA work for Buffalo Niagara.

Speakers will include Jerome Wright from the Campaign for Alternatives to Isolated Confinement, India Walton from Open Buffalo, Andrew Marcum from the Center for Self Advocacy, Fidèle Menavanza from the Center for Elder Law and Justice, Allie Urbanski from the Community Foundation for Greater Buffalo, and more.  Elected officials, including Buffalo Common Council Member Ulysees O. Wingo, Sr., will be attending.

Performance artist Brian Jay will open the proceedings with an excerpt from Free Fred Brown!, a Ujima Theater Company Just Transition play, and poet Jillian Hanesworth will close with an original piece.

The event is open to the public.