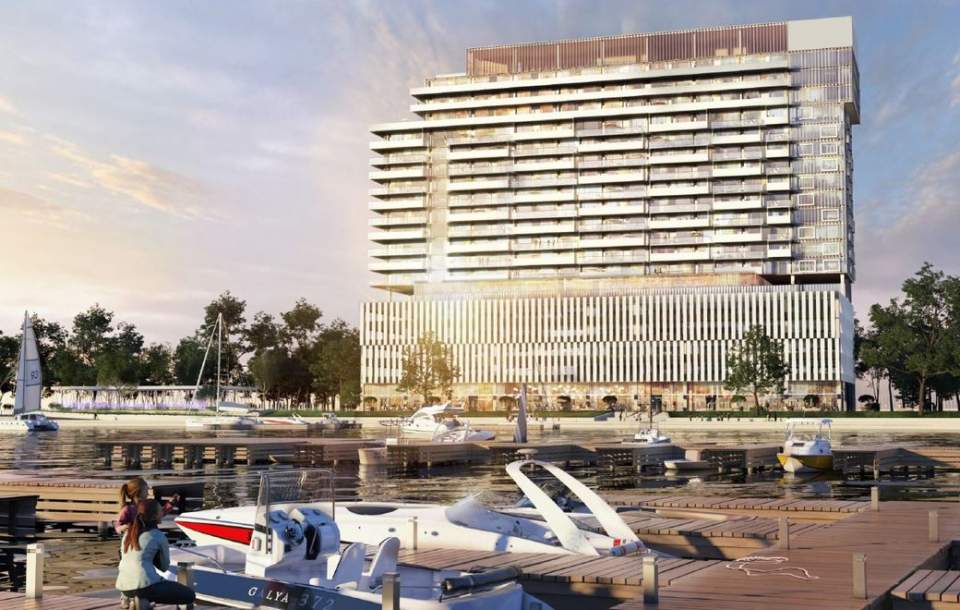 The Queen City Landing project faces a long road ahead.

No sooner did Gerald Buchheit file his revised plans for his ambitious apartment tower on the Outer Harbor than project opponents responded with renewed complaints, criticism and threats of more litigation to stop it.

The nature of the objections are familiar.

The project is too tall and large for the site.

It's inappropriate as a private development on the waterfront because it'll impede public access to the lake.

It will endanger the environment and create too much traffic.

It's not a safe place to put people because of the risk of flooding, and it's a danger to migratory birds and fish.

"Any development on the Outer Harbor must undergo careful and thoughtful scrutiny. It must be held to the highest standards," said Margaux Valenti, staff attorney for Buffalo Niagara Waterkeeper. "The Green Code never envisioned for this type of development along our Outer Harbor."

But this time the process is taking place under the city's Green Code – which puts new limits on developers but also new offers opportunities to streamline the process. That includes a new planned-unit development, or PUD, designation to establish a consistent set of zoning rules for the entire site, which Buchheit is seeking, much to the alarm of his critics.

Even if Buchheit ultimately wins approval, his attorney is now assuming that a legal fight is inevitable, and is acting accordingly by providing voluminous documentation to the city Planning Board and Common Council to back up the developer's application and justify the conclusions they desire.

"I’m usually accused of killing a few trees, but we did go way over this time," said Adam S. Walters, an attorney representing Buchheit, explaining to the Planning Board on Monday why they had just received such a thick packet of information. "It is a lot to throw at you. We really felt it was important, in light of the possibility of additional litigation, to make sure there was a thorough record."

Opposition to the project is mobilizing among environmentalists, Green Code advocates and other activists to prevent an infringement on the waterfront that violates the land-use and public access principles they hold dear. On Tuesday, a parade of 15 speakers rose before a Common Council committee to denounce the project and demand that the city reject the PUD application, raising uncertainty about its prospects.

"It’s also more about the type of development we want in Buffalo," said Andrea Ó Súilleabháin, executive director of the Partnership for the Public Good. "To approve the Queen City plan would be a major setback to a city that is just rediscovering the beauty of its waterfront."

Critics said the proposal violates not just the Green Code – which limits building height at the harbor to six stories and 90 feet – but also the principles of the Local Waterfront Revitalization Program, which seeks to protect coastal habitats and discourages large-scale residential development in that area in favor of recreational use.