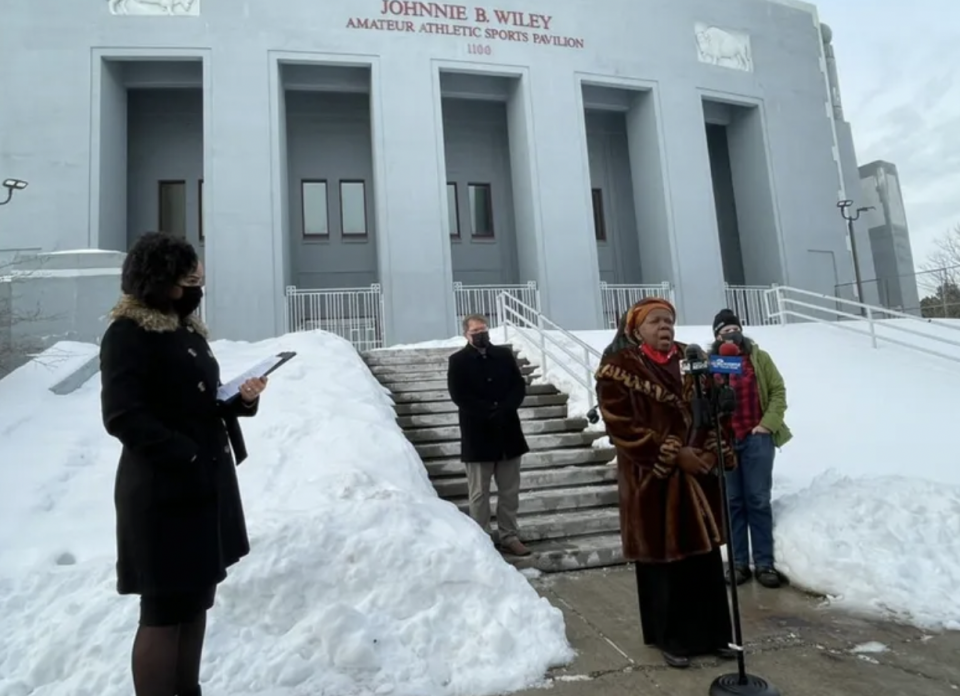 A local coalition known as Partnership for the Public Good held a press conference at the steps of the Johnnie B. Wiley Pavilion in Buffalo on Wednesday calling for Erie County Legislators to insist on a robust community benefits agreement as part of negotiations for a new Buffalo Bills stadium.

"The reason that community benefits agreements are increasing use all over the country is because voters, taxpayers have held that a massive expenditure of public money without any public benefit is fundamentally unjust," said Policy Fellow at Partnership for the Public Good, Miles Gresham.

"The deal for the new stadium in Erie County, wherever it's to be built, looks like it may involve up to a billion dollars in taxpayer expenditures to pay for a stadium that will benefit a private organization, the Buffalo Bills. As much as we all love the Buffalo Bills, it doesn't make sense to spend that amount of public money without the public reaping some of the benefits."

Public benefits for the community can be guaranteed by a community benefits agreement. In examining other CBAs for similar projects around the country, it has shown what public benefits are possible, and what other communities have successfully negotiated in exchange for their participation.

"When governments expend large amounts of taxpayer money on private ventures, it does so in the context of a community benefits agreement that guarantees that the profits from that expenditure won't just be kept in the hands of that private enterprise. That it will, in fact, come back to the people," Gresham said.

The example used on Wednesday was that with the current agreement in place between the City of Inglewood, California and the Los Angeles Clippers of the National Basketball Association. An agreement was reached with local government to purchase land for a new arena for the amount of roughly $66 million. In exchange, the Clippers agreed to $100 million in public contributions to the area around Inglewood that went towards paying for a revolving loan fund for first-time homebuyers, building libraries, and establishing all sorts of benefits to create other economic opportunities.

The Partnership for the Public Good is calling on local leaders to go beyond the minimum labor and hiring standards required by state law, to insist on a CBA with specific commitments, including better-than-minimum minority and women-owned business participation, unionized labor, funding for wellness, housing, and youth sports programs, and worker and fan public transportation. Community organizations and taxpayers are asking elected officials to demand a substantive, long-term agreement that will benefit all communities in the county for years to come.

"The hope it is guaranteed that a CBA that means something to the entire community will be honest, will be true and will be respectful of underserved and marginalized communities, as well. It's not just about the game, it's about the people," said PPG board member Karima Amin. "I think the more we understand how important it is to all people in this community, then we'll understand what the need is."

To read the article on the Audacy/WBEN website and to listen to the press conference, click here. Photo by Tim Wenger, WBEN.