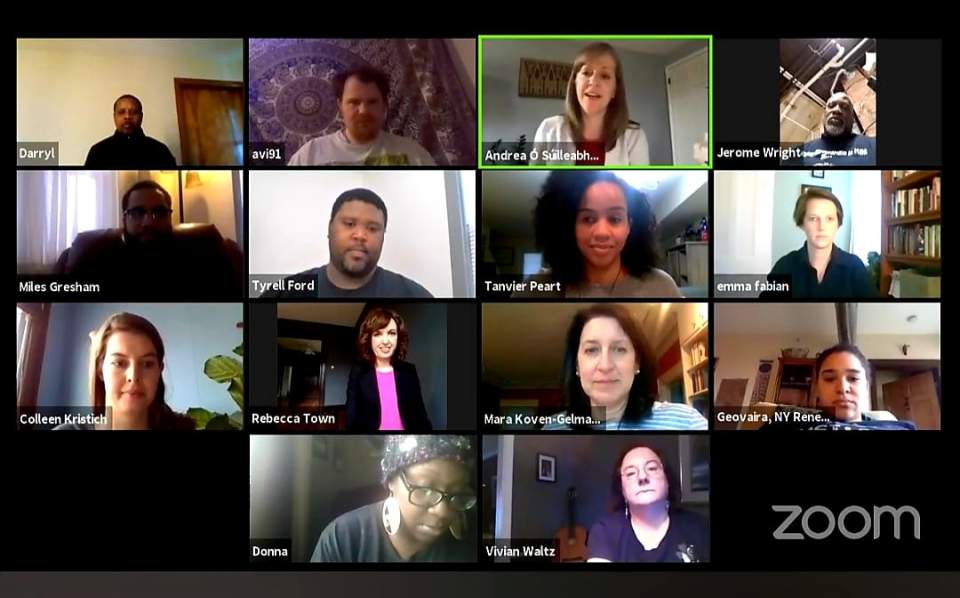 A town hall meeting on bail reform planned for March 18 was transitioned last-minute to an online format to prevent the spread of coronavirus. Over 70 people tuned in last Wednesday evening to hear testimony about the recent changes to bail laws from attorneys, people directly impacted by bail, and their family members. Advocates spoke to the need to protect the reforms from rollbacks in this legislative session and pointed to the positive effects that have already been shown after just a few months of implementation. A video recording of the town hall is available here.

Under the old bail laws, “You’re guilty until you’re proven innocent,” said Darryl Scott, a community organizer who once spent 14 months pretrial in the Erie County Holding Center as a young man because he could not afford to pay a $15,000 bail. Thinking that he could be go home immediately if he pled guilty, Scott agreed to a plea deal which ended up adding an additional three years of jail time.

High bails were a hallmark of Erie County courts until this year, when judges were no longer allowed to set bail on most misdemeanor and non-violent felony cases. According to Miles Greshman, a public defender at the Legal Aid Bureau of Buffalo, if such laws were in place last year, his teenage client would not have spent five days in jail and lost their place in a GED program because of a false accusation of stealing a pizza, a charge that was later thrown out. “Now, that person wouldn’t have to be in jail a single day. That’s the difference between what the system looked like before bail reform and what it looks like now, and those are the kind of outcomes we are fighting to protect.”

State lawmakers in the Senate have felt tremendous blowback to the reforms from the bail bond industry, law enforcement, and Senate Republicans itching to take back seats in the chamber in an election year. In an abrupt about-face from previous positions, Senate Majority Leader Andrea Stewart-Cousins has floated the idea of removing cash bail from the system entirely and replacing it with greater judicial discretion to hold people they may view as dangerous to public safety.

Yet unbridled judicial discretion is precisely what landed Tyrell Ford in jail not just once but three times due to high bail being set again and again for a single charge. As a young man, Ford was arrested for getting into a fight after a white man called him a “n-----.” Even though it was his first offense, the judge decided to set bail at $10,000, which a family member paid. When Ford returned for his next court date several months later, the same judge again decided to set bail, with no reason stated, again for $10,000. Ford’s mother had passed away five years earlier and his father was retired, but his father scraped the money together to pay bail a second time to free his son. The third time Ford returned to court, the judge looked at him, a young man with no criminal history who was legally innocent, and said, “Why is he out on bail again?” and set bail at $15,000. Eventually Ford’s lawyer filed for a change in judgeship in order to prevent the judge from using her discretion to purposely misuse bail in an attempt to incarcerate a young black man before his trial.

Even a few days behind bars can have devastating consequences, and in the Erie County Holding Center, jail time can be deadly. Monica Lynch, sister of Connell Burrell, told those on the call that less than 24 hours after being held on a violation of disorderly conduct at the Holding Center in 2019, her brother, a diabetic, was dead. At Burrell’s initial entry into the Holding Center at 2:00 pm on July 31st, his blood sugar was tested and was a little higher than normal. A few hours later his blood sugar was even higher so he was given a dose of insulin, but it wasn’t until he became unresponsive that evening that he was taken to the infirmary, even though his family members had been calling and asking for him to be treated after they knew something was wrong from talking to him on the phone. By that time, Burrell’s blood sugar had skyrocketed to over 500 mg/dL and when the nurse administered insulin it plummeted into the 20s. The nurse took what turned out to be a fatal action and gave Burrell a peanut butter sandwich to eat, which blocked his airway when he went into a coma. Emergency responders took Burrell to the hospital at 11:30 pm where he was pronounced dead, after just over nine hours in the Holding Center. It would be another ten hours before any of his family was notified by hospital staff of what had occurred.

Advocates and survivors were united in their commitment to keep insisting that recent bail reforms be protected, in an effort to prevent any further tragedies from taking place in custody and to advance civil rights for all defendants accused of crimes regardless of their race or income. Attendees were encouraged to call the offices of Governor Cuomo, Majority Leader Stewart-Cousins, and Assembly Leader Heastie to express their support for the laws as they were adopted in 2019 and to oppose to any changes that would erode this hard-won progress.

-- Colleen Kristich, Community Researcher at Partnership for the Public Good