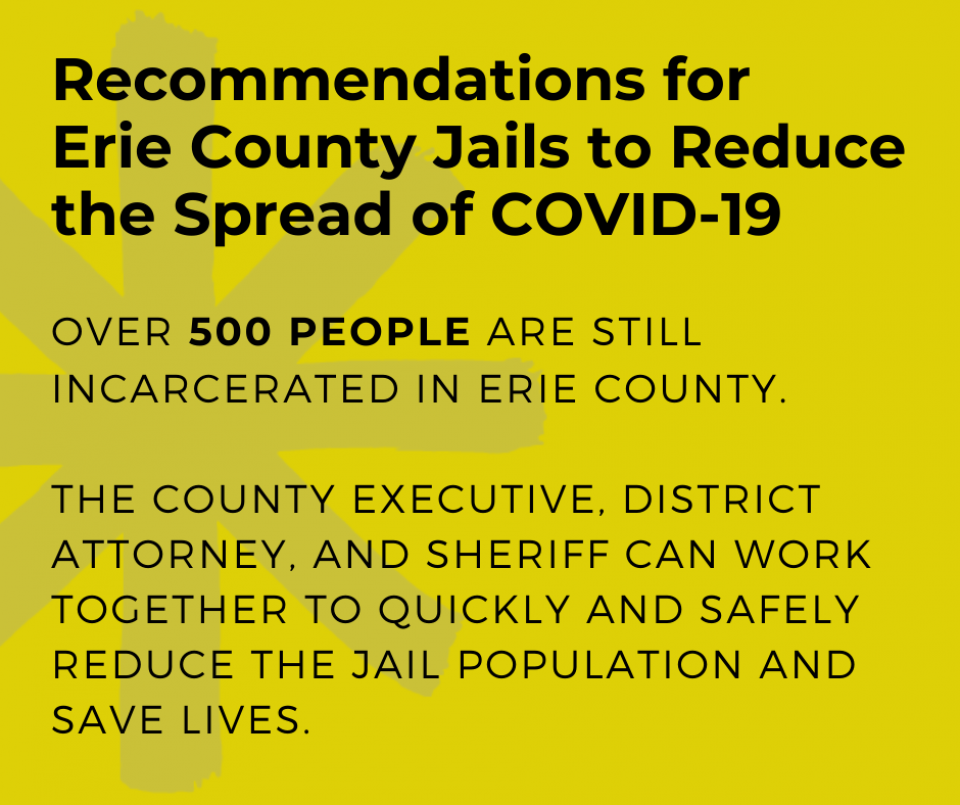 Infectious disease can spread rapidly in jail settings. Because of the daily turnover in staff and inmates, outbreaks are not contained within the walls of the jail but can quickly affect the health of the whole community. The speed at which an outbreak can spread within jail settings is worse than inside cruise ships where tight quarters, shared use of bathroom and dining facilities, and lack of cleaning and hygiene supplies and practices multiplies infections at lightning speed.

On Rikers Island in New York City, the number of confirmed COVID-19 infections exploded from one to 961 cases in less than a month, with most cases among corrections staff. Nine people have died. Rikers Island is “the epicenter of the epicenter” of the pandemic which could have been avoided had local officials mobilized to prevent the disaster that public health and corrections experts had warned of.

In Erie County, where the number of confirmed cases within jails remains relatively low, there is still time to avoid the scale of the tragedy that struck New York City jails. Elected officials must move quickly to avoid rapid spread in county jails.

Erie County can safely release incarcerated people who are most vulnerable to COVID-19.

Municipalities in more than ten states have released prisoners over the past month to avoid exacerbating the COVID-19 crisis in their community. Directives to quickly reduce local jail populations have come from county sheriffs, county executives, administrative judges, mayors, police departments, and district attorneys, and in most locations decisions have been made collaboratively between several of these parties and the courts. The most common releases across localities have been inmates who:

Many localities are assessing inmates for their risk to public safety and are releasing on a case-by-case basis people who have been sentenced but meet one of the following categories:

Localities differ on how to manage releases. In cases where the person has not been convicted of a crime or the person is being held on a technical violation only, pretrial services, probation and parole officers can provide supervision if necessary or a judge may decide to impose house arrest or electronic monitoring if the charges and individual circumstances warrant. For sentenced inmates,  localities have formed furlough committees to identify medically at-risk inmates and have temporarily released these inmates on furlough, using emergency powers to extend the furlough limits until the threat of the pandemic has passed. In cases where the sentence is within days or weeks of being completed, county administrators should consider early release without furlough. Alternatively, some inmates may qualify to be re-sentenced to probation, house arrest, or community service which would allow them to exit incarceration and serve the remainder of their sentence safely from home or in the community once the threat of the pandemic has passed.

Who has Erie County released? Who is still incarcerated?

In Erie County, the overall jail population has decreased by 78 people, from 606 inmates in both county facilities on March 18 to 529 as of April 15. Each week over the past month saw steady declines until the week of April 12, when the population plateaued. According to reporting by Investigative Post, the combined populations of the Erie County Holding Center and Correctional Facility on April 15 were approximately the following:

Local efforts have already resulted in some releases. Seventeen people with less than 45 days to serve on a local sentence were released. Erie County District Attorney John Flynn has said he will continue to review cases as they enter the 45-day window. Defense attorneys have filed bail motions for 62 pretrial defendants; 15 of these have resulted in release and 18 in lowered bail amounts. In addition, Governor Andrew Cuomo granted release for some parolees being held on technical violations (such as missing curfew); however, strict parameters have resulted in only four releases in Erie County, while 70 people remain held on technical violations.

The County Executive, District Attorney, and Sheriff can work together to quickly and safely reduce the jail population and potentially save lives. The County Executive should create a working group with the District Attorney’s office and defense bar to review all cases in the jails. The highest priority is to identify inmates who are at the greatest risk of complications or death if they contract the virus; those over 50 years old, those with compromised immune systems, those with chronic illnesses such as asthma, diabetes, cancer, and other conditions, and those incarcerated on low-level misdemeanors and nonviolent charges.

People who are incarcerated have high rates of chronic illness—40%, according to the Bureau of Justice Statistics, 20% of whom have asthma (compared to 11% in the general population). Identifying and preventing coronavirus infection for these inmates is critically important for the individual and his or her family. It is also in the best interest of the community and will preserve medical resources strained by the crisis.

For people serving local sentences, the County Executive can order the Sheriff to create a standing furlough committee and release people under Correction Law § 633. The majority of people sentenced to local jail time are sentenced to a year or less on a misdemeanor charge, such as petit larceny or drug use. These low-level crimes do not come close to warranting the risk of contracting a dangerous illness like COVID-19. Moreover, much of the housing in the Erie County Correctional Facility where the sentenced population is held is dorm-style or “pods” and this arrangement makes social distancing difficult, if not impossible. Immediately furloughing or releasing elderly or medically vulnerable people from the sentenced population would make a difference quickly without risking public safety.

The same review should take place for the pretrial population, both those who are legally innocent and those who are being held for violating a condition of parole. With hundreds of pretrial defendants still held in Erie County, waiting for defense attorneys to bring motions for every individual will take weeks or months. Instead, a review of all pretrial inmates should be done immediately to proactively identify those who are over 50 and those who may be medically at-risk. The District Attorney and Pretrial Services can then work to find non-monetary conditions for release, or release to supervision if necessary.

Another option is for the County Executive and the Sheriff to apply Correction Law § 141, which allows the "local commissioner of correction," or the sheriff in Erie County, to move people from the jail as a result of an outbreak of disease to another safe location. This law can be used to release into the community pretrial or sentenced inmates who pose little threat to public safety.

The County Executive can also minimize the spread of COVID-19 by authorizing the use of emergency county funds to provide everyone released from local jails with a quick assessment for any COVID-19 symptoms, hand sanitizer, and transport to their destination. In addition, county administrators should explore the possibility of utilizing empty hotels to house elderly and medically vulnerable released individuals who lack access to stable, permanent housing.

Distancing and medical care—including testing and hygiene supplies—must be provided to those still in jail.

If a thorough review process finds that there are inmates who cannot be safely released to community supervision or furloughed, these remaining inmates should be spread out through county facilities so that safe distances can be maintained between inmates. As of April 20, there were only 528 inmates combined between both the Erie County Holding Center and the Erie County Correctional Facility, which is 38% of the total capacity. All available space in both facilities should be utilized to allow inmates to keep a safe distance from each other. Meals and recreational times should be scheduled at intervals to prevent large gatherings of inmates and should allow for social distancing while eating or exercising.

All staff and inmates should be given masks to wear if contact between individuals is unavoidable. Under no circumstances should solitary confinement be utilized as quarantine. Inmates who are unwell should be immediately tested, separated from others, and treated with quality medical care; however, they should not be punished with solitary confinement for exhibiting symptoms. Finally, handwashing with soap, showers, laundry, and hand sanitizer should be made readily available to all inmates in order to interrupt transmission of the virus.

Law enforcement, the District Attorney, and judges can all take urgent steps to reduce the number of people entering our jails in the first place.

Law enforcement should issue citations and tickets instead of making custodial arrests in all situations except where serious violence has occurred, as is the case in Los Angeles. Buffalo police have reduced arrests, with daily averages dropping from 20 to 30 arrests per day to fewer than 10. However, community groups report that some unnecessary police stops, interactions, and ticketing continue – often by officers who are not wearing health-protective gear, putting residents and themselves at risk.

The District Attorney’s office should avoid prosecuting low-level offenses that pose no risk to public safety and dismiss these cases, as is being done in Brooklyn.

Courts should avoid setting monetary bail on all defendants except the most serious cases of violent felonies where a specific person is at risk of harm. If bail must be set, judges should ensure that the defendant has the resources to pay it immediately to avoid jail time and the high risk of exposure. In addition, courts should expedite the resolution of cases that can be resolved by plea bargain, especially cases that qualify for time served, sentencing to probation or community service, or electronic monitoring, all of which would keep jail populations lower and reduce the public health threat that jails pose to the whole community, as is being done by judges in Cuyahoga County, Ohio.

- This post was written by Colleen Kristich, Community Researcher at Partnership for the Public Good. She can be reached at colleen@ppgbuffalo.org.