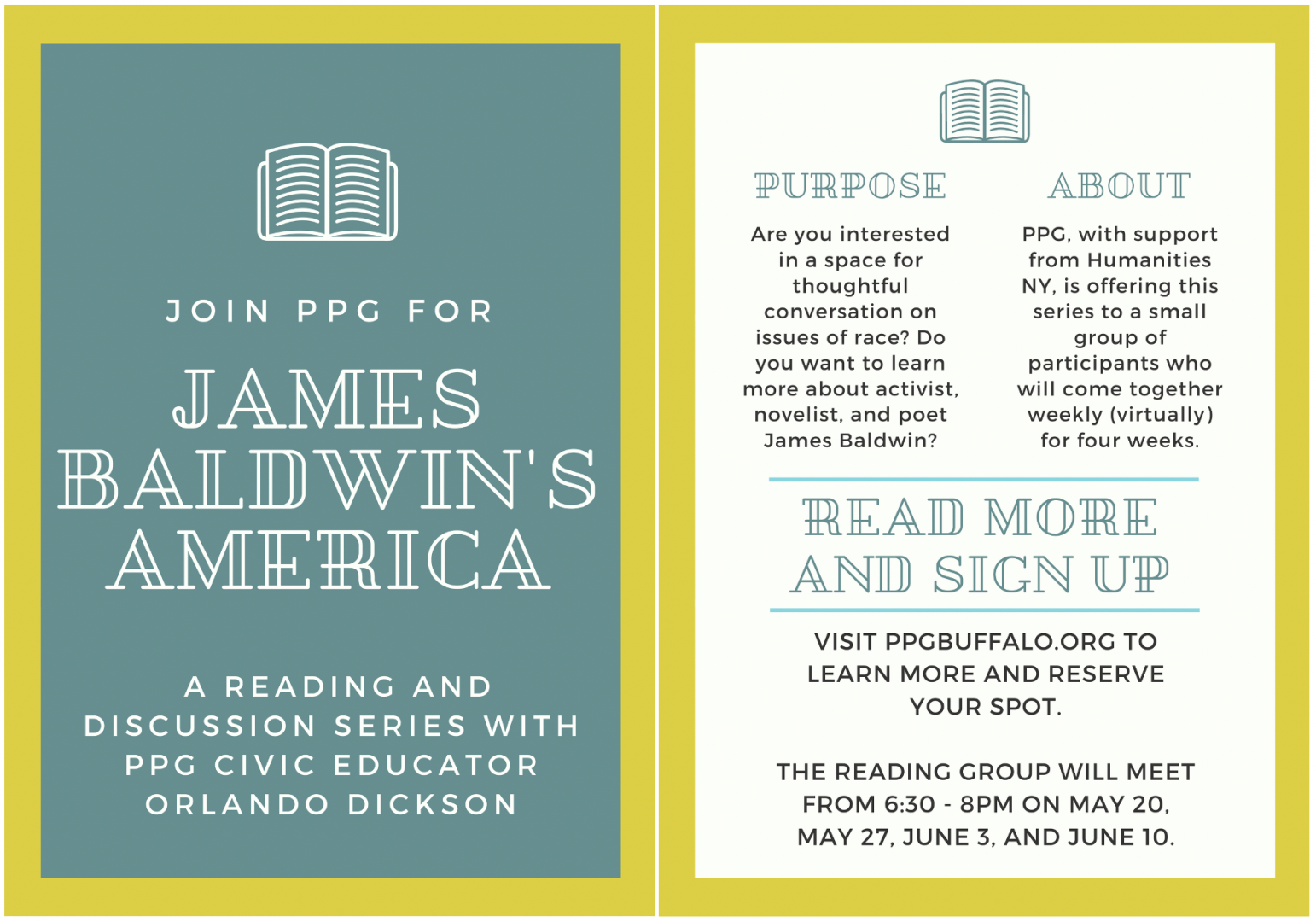 Are you interested in a space for thoughtful conversation on issues of race in America? Do you want to learn more about activist, novelist, and poet James Baldwin with like-minded, open-hearted people? Join us for our reading and discussion program on James Baldwin’s America, gathering four Thursday evenings in May and June.

Partnership for the Public Good Civic Educator Orlando Dickson will facilitate this series, as we read selections from three of James Baldwin’s most powerful non-fiction works.

In “Notes of a Native Son,” Baldwin not only tells us but shows us how integral Black people were in the building these United States. Baldwin holds up a mirror to American society and passionately says we know what’s hiding underneath the mask, reveal yourself, see yourself.

In “Nobody Knows My Name,” we find Baldwin attacking racism through a psychological lens. A more reasoned, calm, and wiser Baldwin struggles with growth gained from returning to America, his role as a writer and that of others like Richard Wright and Norman Mailer.

In “The Fire Next Time,” Baldwin takes on a prophetic and poetic tone. Baldwin, now playing the long game, examines, explains, and predicts the consequences of racial injustice that we are seeing now in American society.

How did this series come about?

PPG, in partnership with Humanities New York, is offering this series to help strengthen civil society and community through the humanities. A small group of participants will come together weekly for four weeks, taking time to think deeply about race and community issues from a variety of perspectives.

We chose the topic of James Baldwin’s America with an understanding of how much racial injustice still perseveres in this country. Baldwin was alive and writing during the time of one of America’s greatest progressions as a nation, the civil rights movement. Baldwin persuasively expresses the irrational nature of racism and the pain of each bigoted moment, and perhaps most importantly, pleads to humanity for it to cease. Perhaps in his work we can find a persuasive method of convincing modern America to move closer to that world he dreamed of. We will also take time to reflect together on what Baldwin’s work means for our collective efforts to build a more just and equitable Buffalo Niagara.

What will be expected of participants?

Participants will receive a packet of selected James Baldwin readings, along with a reading schedule for our four weeks together.

The group will meet over Zoom each week, to discuss assigned readings.

On what participants can expect, PPG Civic Educator Orlando Dickson said, “This is meant to be transformative, not overwhelming, and more fun than a chore. We want this to be genuinely meaningful for everyone involved. It’s important to note that I won’t be in charge. We’ll help each other grow — I’ll be there to help maintain organization and mutual respect.”

When is the series, and how do I sign up?

The group will gather virtually on four consecutive Thursdays: