Partnership for the Public Good joins with the Erie County Corrections Specialist Advisory Board in calling for the release of prisoners from county jail facilities to reduce the spread of the novel coronavirus.

Erie County government officials including the County Executive, District Attorney and Sheriff’s office must work together to quickly identify and release persons in the jails who are at high risk of complications and death if they contract the virus, including people who are over 50 years old, people who have pre-existing medical conditions, and pregnant women. It is critical to prioritize these groups and expedite their release. In addition, the same officials must further safely reduce the jail population by releasing the other categories of prisoners named in the Advisory Board letter who are either legally innocent or incarcerated on low-level charges or non-criminal violations of parole.

Erie County must do more to provide mass testing to all inmates, as outbreaks in other facilities across the country have demonstrated. After Montgomery County, Pennsylvania  provided tests to all inmates, the confirmed cases of COVID-19 were 30 times higher in county jails than previously thought. Similarly, once tests were administered in a prison in Ohio it was discovered that 80% of the inmates had COVID-19. Erie County thus far has tested a total of only 3 inmates. The risk to all county residents of an undetected outbreak in county jails is incredibly dangerous, as guards report to work and return home, and as individuals are released unaware of their COVID-19 status and without support and quarantine. This ongoing lack of testing and precautions in the jails counteracts the county’s other broad efforts to contain the spread.

Read the recommendations of the Corrections Advisory Board here, or by clicking the images below. 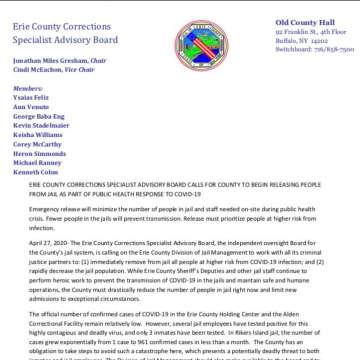 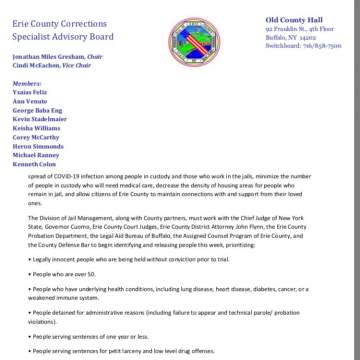 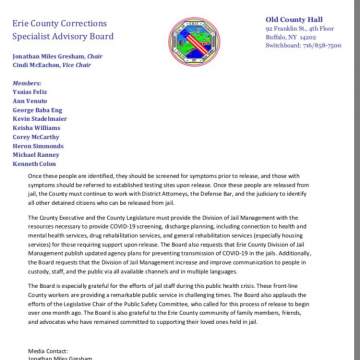