CNN Business: "The long struggle to bring a supermarket to a nearly all-Black Buffalo neighborhood" 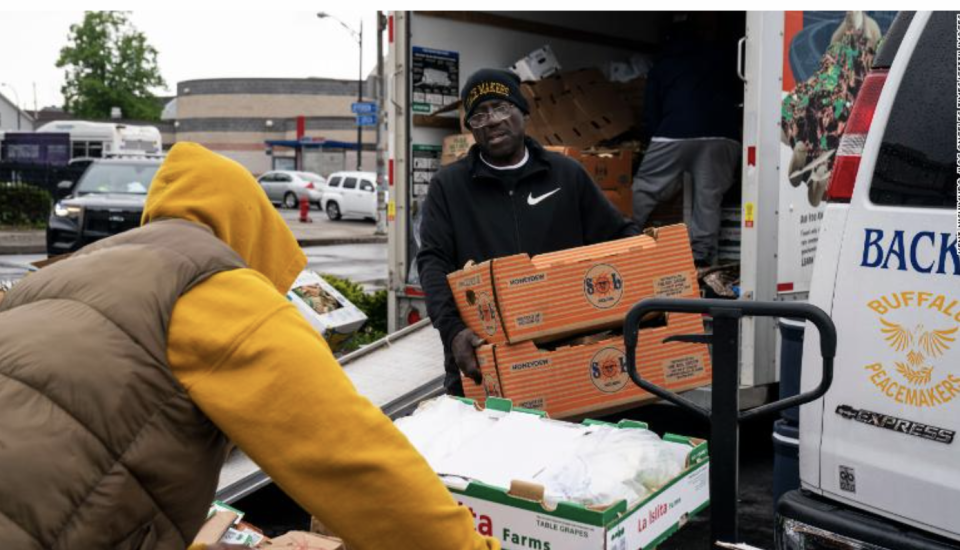 In August of 2001, more than 100 people gathered on the East Side of Buffalo, New York.

The setting, an empty lot in a nearly all-Black neighborhood of this upstate New York city, drew prominent visitors. They included Hillary Clinton and Chuck Schumer, the two US senators from the state at the time; Anthony Masiello, then the mayor of Buffalo; Byron Brown, the current mayor of the city; and other officials.

The 90-minute event featured 18 speakers and was described as "Buffalo's longest-ever news conference."

The group was there to announce that Tops Friendly Markets, a leading Northeast grocery chain, would be built on the site — located where an A&P supermarket stood in the 1960s when the neighborhood was a hub of economic activity for Buffalo's Black community.

The announcement marked the culmination of more than a decade of activism by community advocates and others to address food inequities on Buffalo's East Side and open a major supermarket in the area.

Tops opened to the public two years later, in 2003.

Last Saturday, nearly 20 years after it opened, Tops stood as the lone supermarket in the heart of Black Buffalo when a White supremacist entered the store and killed 10 people and injured three more, almost all of them Black.

The attack struck at a symbol of hard-won progress for the East Side, where 85% of the city's Black residents live. The area is scarred by a legacy of racial segregation, economic and political neglect, dilapidated housing and other barriers. Buffalo remains one of the most segregated cities in America.

Tops "was an institution we fought for. It didn't just end up there," said Henry Louis Taylor Jr., the director of the University at Buffalo's Center for Urban Studies and a historian of race and class. "We used our political power and clout to make it happen. It represented a significant venture against food apartheid."

The attack also highlighted the lack of access to high-quality, fresh food for Black residents in Buffalo, who are six times more likely than White residents to live in an area without a grocery store, according to a 2018 report by the Partnership for the Public Good, a Buffalo Niagara community-based think tank.

This gap in grocery store access, which some describe as "supermarket redlining," exists along racial lines nationally, too.

The rise of supermarkets in America closely mirrored the creation of the suburbs. As many White residents left cities during the second half of the 20th century, supermarkets boomed. In the 1980s, top grocery chains merged and the industry consolidated, resulting in fewer stores in major cities. Even today, supermarket chains have been reluctant to expand in minority neighborhoods. Some elected officials and experts claim that's in part because of stereotypes of these communities as poor and crime-ridden.

Today, on average, in the 50 largest US metro areas, roughly 17.7% of predominantly Black neighborhoods had limited access to supermarkets, compared to 7.6% of largely White neighborhoods, according to a 2020 analysis conducted for CNN Business by the Reinvestment Fund, a nonprofit community development organization.

The racial disparities persisted across the income ladder, according to the analysis, which used a combination of 2016 supermarket location and Census data.

'Heart and soul of Black Buffalo'

"The high cost of housing in other parts of the city caused Blacks to be stuck in place," Taylor said. "Blacks could afford to live only in low-rent districts," mainly on the East Side.

The neighborhood was the "heart and soul of Black Buffalo" following the second wave of Great Migration after World War II, said Taylor.

Buffalo's Black population swelled by 75,000 from 1940 to 1970. At the same time, White residents began leaving Buffalo for the suburbs. Buffalo began a long economic decline around the 1950s as the population shrank, factories shuttered and stores closed.

"The urban landscape began to change to benefit suburbanites," the Partnership for the Public Good report said.

One such example was the Kensington Expressway, completed in 1971 just blocks away from the future Tops location. The highway cut through the East Side, razing Humboldt Parkway, a tree-lined boulevard that connected its park system, and split the community in half. It displaced residents, forced businesses to close and led to pollution and other damaging health effects.

Another consequence of Buffalo's population decline was that grocery stores closed on the East Side, including chains such as A&P, Bells, Super Duper and Acme Markets.

"The city didn't see the need to deal with the issues of food security inside of the African American community," said Taylor. "It wasn't until Blacks begin to rise in political power in the 1990s that they acquired enough cachet in the development of these stores."

Despite growing frustration among Black residents about the lack of healthy food options, it was a struggle to recruit a major supermarket to open in the neighborhood.

"It was a Herculean task," said Antoine Thompson, who represented the Masten district as a member of the Buffalo Common Council from 2001 to 2007. "We were reaching out to any and everybody to bring a supermarket into the inner-city area."

Officials met with representatives of chains and drove them around the city without success. Wegmans had recently opened a location on the West Side, but leaders couldn't get it to the East Side.

"It's always a struggle getting some of these major brands in these inner-city areas," Thompson said.

A separate effort to start a community-owned supermarket called Our Market also began. The group's goal was to create a co-op that would be entirely owned by local residents, who would pay $25 in fees a year for a membership.

Although the co-op didn't come to fruition, the board of directors of Our Market pressed the issue of food access. Grass roots leaders held community meetings and commissioned a study to highlight the business opportunity in the area.

These advocates "put the issue of shopping apartheid in Buffalo on the public agenda and kept it there throughout the late 1990s," a Buffalo News reporter wrote at the time. "If it weren't for them," Tops wouldn't have broken ground on a new supermarket.

Tops, which was then owned by Dutch grocery giant Ahold, received $1.5 million in taxpayer dollars to help finance the project and $1.5 million in state, county and federal grants -- a large incentive package for a grocery project.

The store was smaller than many Tops in other areas of Buffalo, frustrating some in the community. When it opened, along with a pharmacy, a bank and a cafe in the store, it was seen as a boost to local jobs, employing 100 people, including a Black manager named Virgil Hamm Jr. Around 25% of the construction work had been awarded to minority-owned firms.

"This is one of the first stores I've been in where the community has taken complete ownership of what's going on with the store," Hamm said a year later. "It's been said over and over by our customers, that 'We're glad you're here.'"

The opening of Tops did not usher in a new era for Black residents on Buffalo's East Side, as some hoped it would.

"Most Blacks live on Buffalo's East Side, and conditions are getting worse in many of those neighborhoods," found a comprehensive study led by Taylor released last year on the "State of Black Buffalo." "The fate of Black Buffalo remains tied to East Side development."

A number of economic indicators, including health, housing, income and education, showed little improvement and, in some cases, declined on the city's East Side over the past 30 years, the report found.

One such measure that stagnated was access to grocery stores.

In Buffalo, there are 51 areas that have limited access to supermarkets, the 2018 Partnership for the Public Good report found. All of them are located on the East Side.

That stands in stark contrast to the more affluent western part of the city and the suburbs, where Wegmans, Whole Foods, and other national chains dot the area.

Buffalo and served as a lifeline for shoppers with few other options for healthy food.

Antoine Thompson, the former councilmember, still keeps a plaque Tops gave out to commemorate the store opening in 2003 in his office.

We got behind this market and we made sure it was first class," he said. The plaque is "a reminder of community success and empowerment."

Tops said Wednesday it's committed to re-opening the store as soon as it can and will put together a team to consider "rebuilding and repairing the store for the community" as soon as possible.

Thompson hopes the supermarket will be larger than it was before.

"I pray that this brings more attention to the fact that we need to expand that store," he said. "We need to have significant investment in that strip."