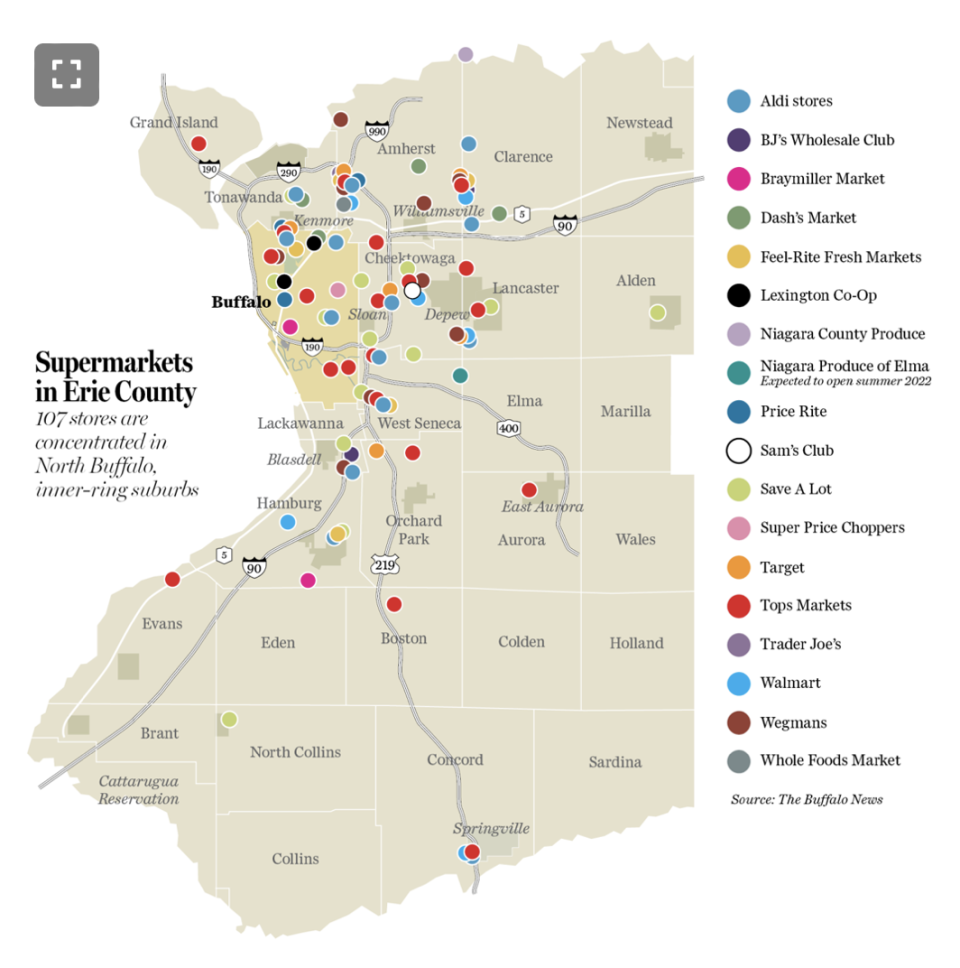 The Tops Markets on Jefferson Avenue, targeted by an avowed white supremacist in a massacre that killed 10 Black people, is the only supermarket within the 14208 ZIP code and a wider section of Buffalo's East Side.

The closest full-service grocery stores are a couple of miles away on Elmwood Avenue, Broadway or Genesee Street.
Community activists and elected officials pushed hard to bring a supermarket to this neighborhood. But in the nearly 20 years since the

Tops opened, no other major grocery store chain has joined it.

Researchers point to a failure to invest in predominantly Black neighborhoods that has left those residents with fewer options for healthy and affordable foods.

"There is, in fact, a demand for food in the neighborhoods in east Buffalo and, specifically, the seven that are around Tops. But the private market has effectively failed the East Side," said Samina Raja, director of the University at Buffalo's Food Systems Planning and Healthy Communities Lab. "And so the fact that residents were able to advocate for this particular Tops, and land it in 2003, is remarkable."

Corporate supermarkets and big-box chains say they don't discriminate in choosing where to locate a new store. Instead, they say they decide based on factors such as population density, traffic patterns and average income.

To be sure, there are pockets in outlying suburbs, and rural communities, where supermarkets are sparse. Of the 25 towns in Erie County, nine that are less densely populated and in predominantly white rural areas have no full-service groceries, according to The Buffalo News' research.

Tops, for its part, has vowed to reopen the shuttered Buffalo store but has not yet offered a timeline.

A Buffalo News review found 107 full-service grocery stores in Erie County, including 22 within the Buffalo city limits. Many of those city stores are located in North Buffalo, Black Rock and the Elmwood Village.

There are three full-service markets within four ZIP codes that cover a large section of central Buffalo and the East Side, where about 50,000 people live and 72% of the residents are Black: the Tops on Jefferson and Save A Lot and Super Price Choppers on Genesee Street.

"It's still insufficient by every stretch of the imagination," said Henry-Louis Taylor Jr., director of UB's Center for Urban Studies, who argues for public investment in a Black-led co-operative market on the East Side. "And so, in many ways, this shooting has brought us back to ground zero again – we're a community without a grocery store. And now we're faced with critical choices in terms of how to go forward."

Residents and community leaders throughout the 1990s, organized under the "Our Market" banner, sought to bring a co-operative grocery store to Buffalo's inner city.

They commissioned a market study to show this community could support a supermarket because lack of competition and population density would make up for lower average incomes.

However, city officials never fully backed the co-op model, instead making a push to bring a corporate supermarket into the area. By the early 2000s, community and civic leaders, leveraging millions of dollars in tax incentives, convinced Tops to open a store on Jefferson in the Cold Spring neighborhood.

"There was a lot of work trying to get a 'yes,' " said Antoine M. Thompson, a former Buffalo Common Council member and state senator who advocated for the store. "And then once they got to 'yes' the community wanted to make sure it was a good 'yes,' right? That it was a store that was built with quality."

Groceries clustered in Amherst strip
The grocery chains say, essentially, they build where their customers are. They rely on analyses of vehicle traffic, population, income and education levels and other demographics to drive those decisions.

Wegmans, for example, has nine stores in Erie County with just one in Buffalo, on Amherst Street in Black Rock.

"We operate with a high volume, low price business model. In order to achieve this, we need a lot of customers shopping in our stores and we employ a large number of people to serve them," Michele Mehaffy, a Wegmans spokeswoman, said in a statement. "We build in densely populated areas that can accommodate a store our size with adequate parking."

Poloncarz, speaking to reporters Friday, didn't name any supermarket chains but was pointed in his criticism of their site-selection decisions.

"There are other supermarkets in this area that could build on the East Side of Buffalo but have elected not to," Poloncarz said. "There are some very well-known ones that have two, three in the Amherst-Cheektowaga area and only have one in Buffalo. Questions need to be asked of those other corporate citizens: Are they potentially going to build one?"

Industry representatives say grocery stores operate on a thin profit margin even in the best of times, let alone during the recent period of supply-chain issues, soaring costs for food and staffing struggles.

That's why, experts say, the stores all seem to end up clustered on the same busy thoroughfares in the suburbs. There's a stretch of Niagara Falls Boulevard, between Sheridan Drive and the I-290 interchange, that has 10 full-service supermarkets – and soon will have an 11th, with the planned addition of a Costco to the well-traveled corridor.

Shoppers at the Tops on Jefferson spend an average of $30 to $35 per visit, focusing on staples such as meat, dairy and produce, said Burt P. Flickinger III, a Buffalo native and managing director at retail consultant Strategic Resource Group.

That's in line with the national average for a shopping trip but well below the $100 spent during the typical visit to a suburban Wegmans, Flickinger said.

"Suburban stores tend to be far more profitable, because of bigger transaction sizes," he said.

Asked how sales at the Jefferson store compare to sales across the Tops chain, spokeswoman Kathy Sautter said the company doesn't release this data.

Local and national research show the practical effect of these business decisions.

In 2020, nearly 18% of largely Black neighborhoods had limited access to supermarkets, compared to just under 8% of predominantly white neighborhoods, according to a study of the 50 largest metro areas in the United States conducted by the Reinvestment Fund on behalf of CNN Business.

Raja, the director of the UB Food Systems Planning and Healthy Communities Lab, in 2008 led a team that studied local census tracts and found race was the primary factor for store locations – even after adjusting for income level and land size.

A 2014 analysis by researchers at Johns Hopkins reached a similar conclusion on the national level.

The term "food desert" is commonly used to describe a section of a city that lacks easy access to healthy food options.

But Raja said this term is inaccurate because a desert often is a naturally occurring environmental feature. She and others prefer terms such as "food apartheid," because it better describes a deliberate separation of neighborhoods into haves and have-nots.

"To tell the full story, we need to understand what is absent here, but also what's been accumulating elsewhere," Raja said.

Academics and community organizers say you can't look at corporate strategies today without putting them in a historic context of redlining and disinvestment in Black communities and of white flight to the suburbs.

"When you cut people – when you cut a whole race – out of economic opportunity for that long, those effects become compounded," said

Miles Gresham, a local attorney and policy fellow with the progressive Partnership for the Public Good.

So what can this region do to tackle the problem of food access in neighborhoods like Cold Spring?

Thompson said he wants to see the Tops on Jefferson reopened bigger and better, and Taylor agreed.

A Tops spokeswoman said senior executives weren't available to comment for this article.

The 29,000-square-foot Jefferson Avenue store is small when compared to some of Tops' suburban supermarkets, such as the 109,000-square-foot store at Maple Road and North Bailey Avenue in Amherst, but the company said its size is in line with some of the chain's newest locations.

Taylor and others called for incentives, similar to those used to draw Tops to Jefferson Avenue, to subsidize a community-led, co-operative market in the neighborhood.

"If food security is a human right, a matter of life and death, then the government has a responsibility to ensure that all citizens have not just equal access, but equitable access to high-quality foods at prices that they can afford," Taylor said.