The Erie Canal Harbor Development Corporation, the state agency that manages the Outer Harbor, is proposing an 8,000-person amphitheater on the waterfront, costing $10 million to build. Buffalo Common Council can approve or reject this project.

In the letter below, PPG shares our belief that this is not the right use for our Great Lakes waterfront. To join us, contact your Council member and ask them to refuse ECHDC's request to build an amphitheater and parking lot on our scenic, important Great Lakes coast.

To: City of Buffalo Common Council

We write to suggest that Erie Canal Harbor Development Corporation’s plan for an outdoor stage and 8,000 person amphitheater is inconsistent with the City’s Local Waterfront Revitalization Plan (LWRP) and does not qualify for a special use permit.

One key policy of the LWRP is that “Water dependent and enhanced recreation shall be encouraged and facilitated and shall be given priority over non-water- related uses along the coast.” A concert venue is not a water-related use, and devoting a key portion of the shoreline to this large-scale, traffic-intensive use can only hinder the water-related uses that should be taking place there.

The LWRP also calls for the protection of the Niagara River Globally Significant Important Bird Area. Cutting down trees, using the meadow for 750 overflow parking spaces, applying pesticides, holding loud events, and bringing large numbers of concert-goers in vehicles to the Outer Harbor will have serious negative impacts on the birds that use this area for feeding, breeding, and migrating. As Buffalo Niagara Waterkeeper noted in its letter of June 4, this spring its volunteers pulled 400 pounds of trash, 1,200 cigarette butts, and 60 balloons from a single Outer Harbor parking lot.

More broadly, the goal of the LWRP is to “safeguard economic, social, and environmental interests of the state and its citizens.” The proposed concert venue will compete with existing venues for a limited pool of offerings, thus damaging their economic viability. It duplicates the plan for a “Great Lawn” outdoor event area for up to 5,000 people at Ralph C. Wilson Centennial Park – a much better, more urbanized location for such events (see attached images from the Centennial Park design presentation). It makes no sense to spend taxpayer money on competing waterfront amphitheaters within minutes of each other. Apart from Centennial Park, there are many concert venues in Western New York located in more appropriate locations and hungry for ticket revenue.

The event venue also flies in the face of the public’s long-expressed desire for an Outer Harbor that focuses on natural beauty. As ECHDC said in summarizing the public’s input, “Overall, they want a space that complements Canalside, a place where you can get away from an urban or suburban environment and enjoy a quieter, simpler waterfront.” In other words, don’t create a second Canalside on the Outer Harbor. Keep the concerts downtown, where they are easily accessible by public transit and generate spin-off customers for downtown businesses. Thus, it is no surprise that of 242 public comments on ECHDC’s General Project Plan, only 3% supported it, and the amphitheater was one of the biggest reasons for the public’s criticism.

The proposal does not qualify for a special use permit. The proposed use will result in damage to features of significant scenic and natural importance. It will require chopping down a significant number of mature trees and using a beautiful meadow for parking. The proposed crowds, noise, and vehicular traffic will inevitable damage the flora and fauna of the surrounding area and thus diminish the public’s enjoyment of it. ECHDC’s plan to use pesticides will harm birds, fish, pollinators, and other natural species. The concert venue is absolutely not “harmonious with the surrounding area,” and it will clearly “impede the . . . use and enjoyment of adjacent property” for hiking, birdwatching, enjoying sunsets, and appreciating the quiet beauty of the location.

While other aspects of ECHDC’s plan may “conserve environmentally sensitive and naturalized areas,” the concert venue and traffic it generates will do just the opposite. And by competing with existing venues, the proposal will cause a “decrease in vitality and increase in vacancy in established employment centers.”

The event venue by definition is active only during sporadic events, most of which will likely involve significant ticket fees that make it inaccessible to those with lower incomes. Instead of catering to high-priced special events, ECHDC should invest the public’s money in encouraging the natural regeneration of the site and allowing the public free, full-time access to it with well-designed trails and paths.

Tickets for the June 19 “Thunder on the Buffalo Waterfront” start at $149. The event will also require closure of the boat launches at the State Park for the entire weekend. Tickets for tonight’s “Sunsquabi and Too Many Zooz Drive-In Concert” start at $165. Is this the “quieter, simpler waterfront” the public requested? What does it say about the kind of programming ECHDC will present at the new venue? Who gets to enjoy these events, and who profits from them?

Finally, any plans for Terminal B should be made together with plans for Terminal A through a community engagement process to identify the best uses for this complex in a holistic manner, rather than considering these two, naturally linked structures in isolation.

What will make people want to live in and visit Buffalo – and thus spur real economic development – is not a redundant concert venue but a world-class park that takes full advantage of one of the most scenic, important, and fragile natural areas on the Great Lakes. For all these reasons, we urge you to find the proposed concert venue inconsistent with the City’s LWRP and not qualified for a special use permit.

Partnership for the Public Good 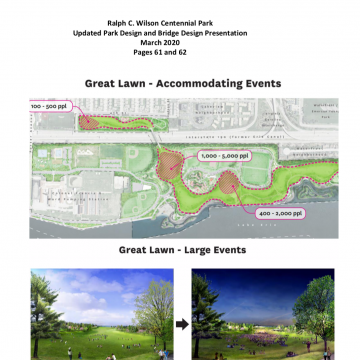