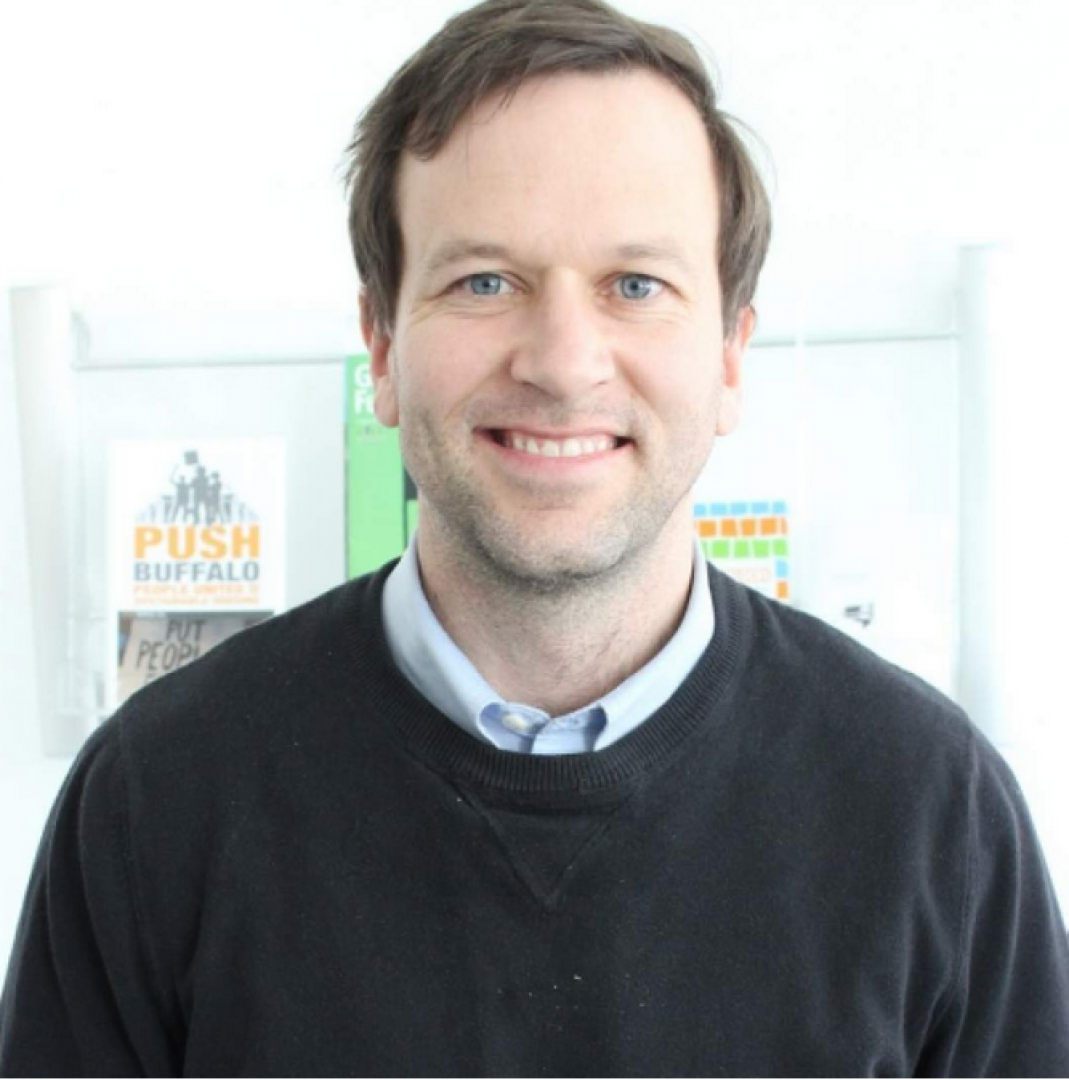 On May 20, PPG’s radio show “The Public Good” hosted guest Aaron Bartley, co-founder of People United for Sustainable Housing (PUSH) Buffalo. Aaron is an Activist Scholar in Residence with Cornell in Buffalo and Partnership for the Public Good, working on a book about land ownership in the City of Buffalo. On the show, Aaron explained why changes in the housing market and climate change make it a crucial time for Buffalo communities to take control of their neighborhood’s development destiny.

The pattern of housing displacement that we’re seeing in Buffalo today is not new, Aaron explains. Wealthy people have been displacing the working class throughout history. An example is Paris in the nineteenth century; Baron Haussmann rebuilt central Paris, displacing the working class. Or we can look at Soho in lower Manhattan. A transformation occurred in just 40 years as the deindustrializing neighborhood’s large spaces were taken over by a large artists' colony. Eventually, Soho transformed into what we see today—a popular tourist shopping destination with some of the most expensive real estate in the country.

Aaron says that in Buffalo, we have a unique opportunity. The City owns a large portion of its land. Effectively, Buffalo residents have collective ownership of over 7,000 parcels. Many cities and their residents haven’t been so fortunate. In cities like San Francisco, residents face a housing crisis and don’t have a method of intervening in the process because the city doesn’t own much of the land. Aaron says that we can put Buffalo on a different track and turn the seemingly inevitable processes of real estate speculation and sales into a more democratic process. By legislating restrictions or requirements on the sale of public land, we can promote the public good through land sales and development.

Aaron contemplates the question, “Who is a developer?” He says we should think past the wealthiest real estate development firms. Buffalo residents can reclaim the term “developer” for themselves and create the kind of developments they want to see in their community. It’s possible to create policies to prevent displacement. The F.B. Community Land Trust (FBCLT) is a good example of this. Residents came together to purchase land collectively and to control what is developed in their neighborhood.

People United for Sustainable Housing (PUSH) Buffalo also had many interventions in land on Buffalo’s west side, including negotiating with the city and private parties for land. Perhaps most importantly, PUSH helped establish a community process for residents to take control of an integrated and holistic plan for their neighborhood.

Aaron advises communities to take the following steps: residents must first understand who owns the land in their neighborhood(s), then investigate who is trying to take control of that land for their own purposes. At this point, the group can do one of two things. They can either create a set of demands—restrictions that the City of Buffalo should require developers to fulfill as a prerequisite to land acquisition—a “community benefits agreement.” Or, they can negotiate with the City to purchase the land themselves.

In fact, one of PPG’s 2019 Community Agenda planks speaks directly to this issue. Currently, many city-owned vacant lots are unaffordably priced—especially for non-profit housing organizations like the FBCLT and Habitat for Humanity. PPG plank #4 asks the City to give some vacant lots to non-profit affordable housing developers for a nominal fee instead of market value. This savings would allow the non-profit developers to create more affordable housing.

We cannot allow private developers control the destiny of Buffalo communities. There is too much at stake. Local hiring commitments, wage standards, community input, and affordable housing are all fundamental matters that should be considered with the transfer of public land. “Any land that is transferred to private parties to the city of Buffalo could have a community benefits agreement attached to it” says Aaron.

City planning without involved community members is unlikely to benefit the frontline communities—those with low incomes and communities of color. It’s crucial that residents have a say in developments that impact their neighborhoods.

Are private developers capable of creating development that will lead to resilient and sustainable neighborhoods during the climate change crisis? Aaron says we cannot put our fate in the hands of private developers that do not give residents decision-making power in their planning and are not mindful of their impact on climate change in the cities where they are building.

Neighborhood residents are best suited for long-term community planning because they are directly impacted by the results. They are the ones who want to know how their transportation, land, water, and energy resources are going to look in the future.

“The Public Good” airs on Power 96.5 FM and Mix1080 AM every Tuesday at 10pm. You can watch the show live each Tuesday at 1pm on PPG’s Facebook page.