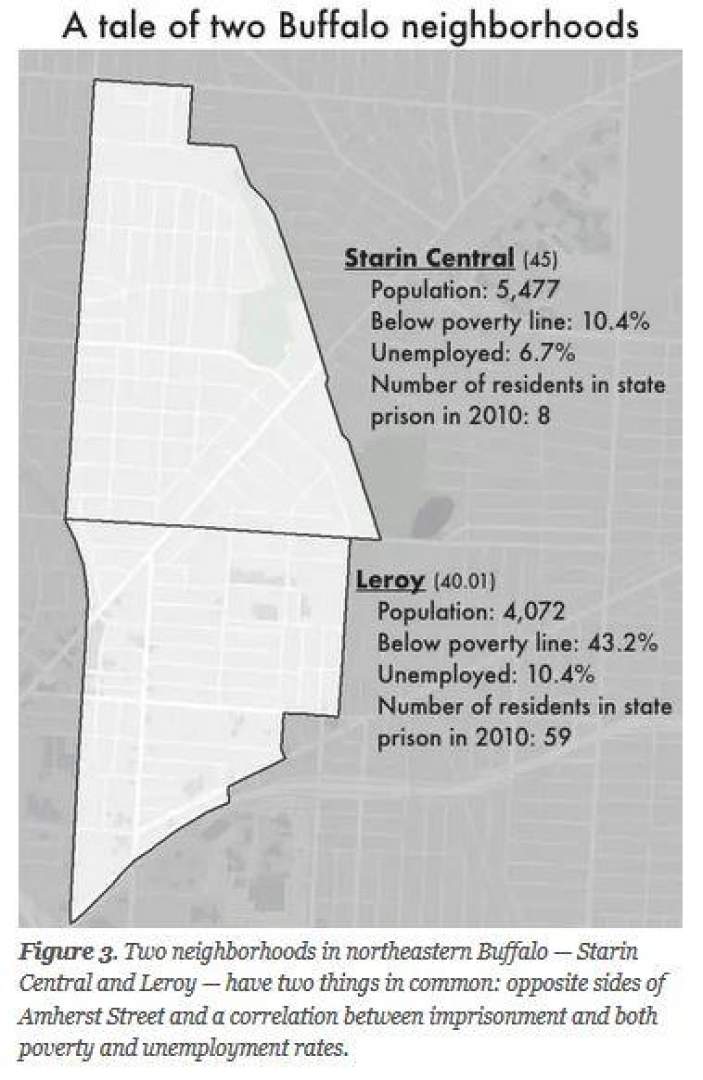 WBFO: "Can Buffalo overcome its racial inequities? The answer isn't black and white"

Demonstrations erupting locally and across the world sparked by George Floyd's killing have been begging for a resolution to the racial inequities between blacks and whites. Buffalo, itself, has sat near the top of most-segregated cities in the nation for two decades, but the University at Buffalo's Regional Institute estimates an additional $12 billion in wealth for area families if racial gaps are closed.

Read on for a current snapshot of the city that includes data provided by PPG.

POPULATION
+ The latest U.S. Census figures put Buffalo's population at just over 261,000. About 47% identify themselves as white, 37% as black and 4% as more than one race.

+ Communities of color are spread throughout the city, but are more heavily concentrated in the northeast. Several neighborhoods on the East Side are at least 92% people of color, while southeast neighborhoods are mostly white.

+ Data USA says the highest-paid jobs held by city residents are law enforcement, including supervisors, who average more than $69,000 a year. That compares to a median salary of about $56,000 for Erie County and nearly $61,000 for New York State.

CREDIT PRISON POLICY INITIATIVE, FEB. 2020
+ Before the pandemic, the Labor Department reported unemployment across Buffalo was 4.9%. That is lower than the national rate for blacks, at 6%. However, unemployment for blacks in the city was nearly twice that of whites and unemployment in some East Side neighborhoods exceeded 20%.

POVERTY
+ According to the U.S. Census, Buffalo's poverty rate is about 30%, compared to a national rate of 13%, and it has remained nearly the same for the last 15 years.

+ Deep poverty is also concentrated in Buffalo. The Partnership for the Public Good found, of those households living on less than $10,000 a year, nearly half are in Buffalo.

+ Nearly a quarter of city residents receive monthly SNAP benefits - the average benefit in the U.S. is $238 per household, $121.30 per person, according to the USDA - while four out of five Buffalo Public Schools students in K-12 qualify for free or reduced-price lunch.

CRIME
+ Crime has dropped every year over the last decade in Buffalo, but the crime rate per 100,000 people is still twice the U.S. average and greater than 96% of other U.S. cities, according to Data USA.

+ For violent crimes - which include murder, rape, robbery and aggravated assault - the FBI ranks Buffalo #17 among cities with populations larger than 250,000. That is higher than Chicago and nearly twice the rate of New York City.

+ Forbes' most recent list of the nation's most dangerous cities ranks Buffalo #11.

This chart shows the number of Buffalo residents in prison in 2010, by Common Council district.
CREDIT PRISON POLICY INITIATIVE
QUALITY OF LIFE
+ The CDC reports the life expectancy of blacks in Buffalo is five years shorter than whites, but in East Side neighborhoods where the minority population is nearly 100%, the life expectancy is 10 years less than the state average of 81.

+ The high school graduation rate of white students from Buffalo Public Schools is about 75%, compared to 60% for black students, according to the district. Only about a quarter of adults over age 25 in Buffalo have a bachelor's degree or higher.

+ About 41% of homes in Buffalo are owner-occupied, but less than 30% of black families in the Buffalo-Niagara region own a home, while nearly three-quarters of white families do, according to the Partnership for the Public Good.

+ The average rent is $757, but more than half of city households - or 55% - cannot afford their rent. Public housing in Buffalo is nearly 90% minority.

+ About 32% of the city's 15,000 firms are minority-owned, according to the U.S. Census, but black Buffalonians are 6 times more likely to live in a neighborhood without a grocery store than white residents.