Learning from National and Local Precedents for Participatory Budgeting 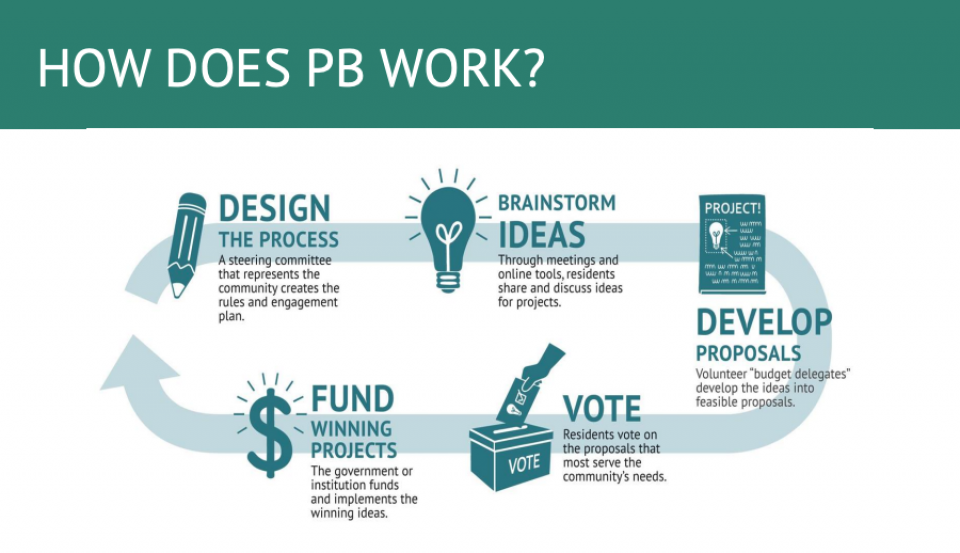 The city budget process in Buffalo has historically seemed opaque to many residents. Community involvement in city finances is often limited to casting their votes for council and mayoral candidates. But there are many ways to increase resident engagement in local government, including the budget process.

One way is participatory budgeting (PB), a democratic tool that has been implemented across municipalities in North America and previously in Buffalo. This was the subject of our Buffalo Commons workshop on September 16, 2020, Taking Control of Public Dollars. Organized in conjunction with Buffalo Niagara Community Reinvestment Coalition, a main message emerged that the PB process increases equity and inclusion.

Kristania De Leon of the national Participatory Budget Project (PBP) reflected broadly on PB including stages towards enactment, funding mechanisms, and community experience. In Oakland, CA, PBP evaluated that residents enjoyed the experience of having input in funding decisions.

“We’ve been involved in the expansion of participatory practices recognizing and understanding that there’s a need for justice transformation to be led with the voices of those who have been most impacted by these systems. Participatory practices seem to be a way to really elevate those voices and perspectives in policy change and decision making,” said De Leon.

Harper Bishop, who served on the committee for Participatory Budgeting Buffalo, described how PB was previously included in the Buffalo City budget in 2015. This was the result of a campaign led by Clean Air Coalition of WNY including activists Natasha Soto and Erin Heaney.

In 2016, residents of Buffalo’s Masten District voted on how to spend $150,000 of Councilmember Wingo’s discretionary funding. Voting took place over one week at libraries and community centers and was open to all members of the community age16 and up. Bishop said, “[PB] is all about voter engagement and civic engagement, and trying to bring people into the process, not trying to exclude them on purpose.”

In 2017, $10,000 of Councilmember Rivera’s discretionary funding was voted on how to be spent by Niagara District residents. Ultimately, the practice of PB fizzled out without re-adoption by the City in 2018. Bishop notes the clear, reignited relevance of PB in Buffalo given enduring police harm and violence against the Black community, and calls to reallocate funds from the police budget to community-led health and safety priorities.

A full video of the workshop and accompanying slides are available on the event page here.