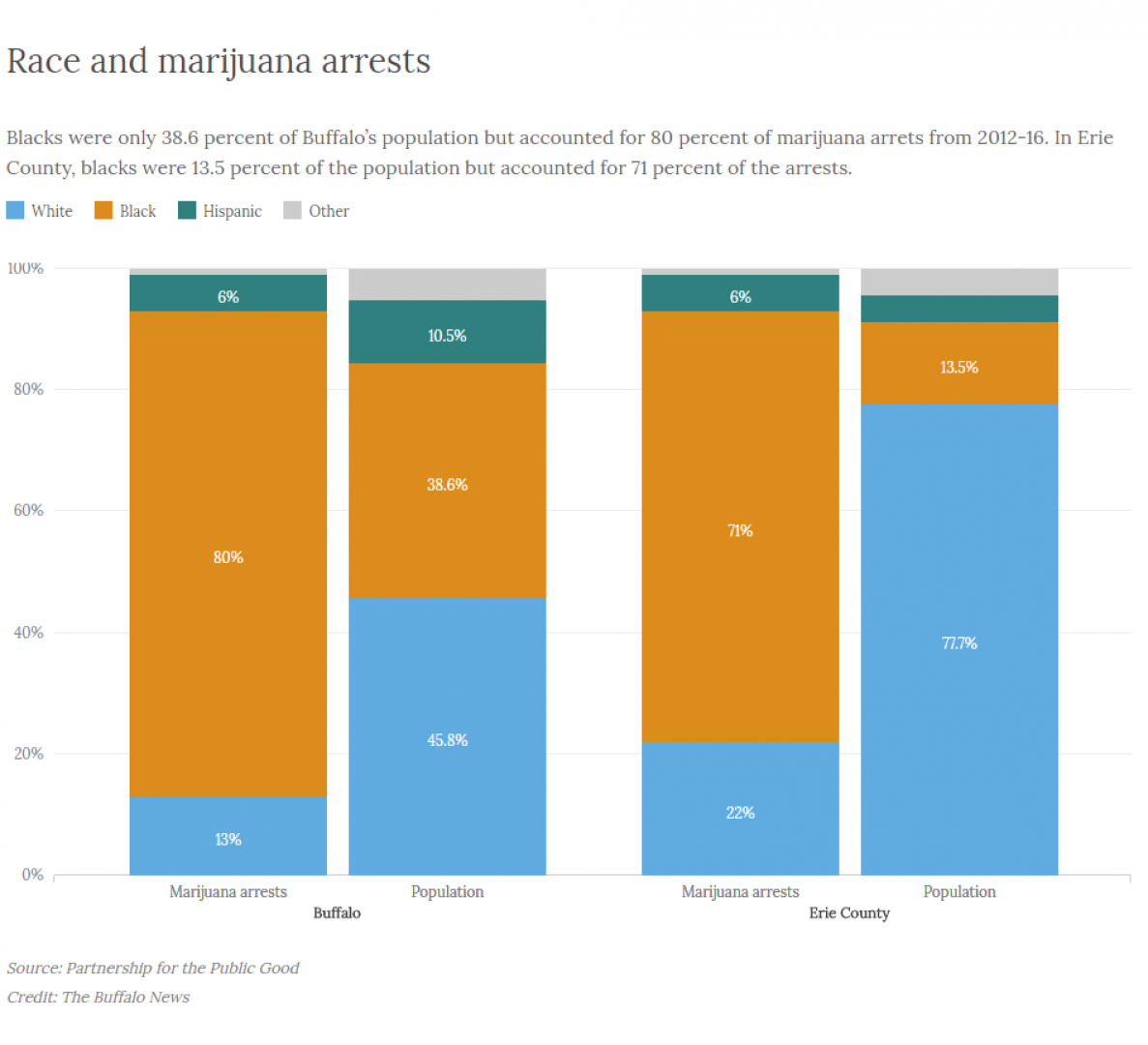 "Authored by the Partnership for the Public Good, a local think tank, the study is intended to boost efforts at reforming New York's marijuana laws. Reform advocates say the costs of marijuana prohibition far outweigh the benefits, especially given the national movement toward legalization."

In just three years, the number of marijuana arrests in Buffalo dropped by more than half.

At the same time, the overwhelming majority of people arrested continued to be people of color.

A new study, released Tuesday, found 86 percent of the people arrested for marijuana possession in Buffalo during the five year-period ending last year were black or Hispanic.

In Erie County, people of color accounted for 77 percent of all marijuana possession arrests over the same five-year period, according to the study.

By comparison, the study found the percentage of blacks and Hispanics living in the city was about 50 percent and 18 percent in the county.

"You can be walking down the street and they'll pull over and stop you," Rashawn Pennick, a local man with several marijuana arrests, said of the Buffalo Police. 'They stop me just to check me."

Pennick, one of the speakers at a news conference promoting the study, has talked publicly in the past about his run-ins with the police and how his arrests forced him to give up his public housing apartment and live apart from his five children.

The new study on marijuana arrests indicates Buffalo is similar to other medium-sized urban communities and confirms that the disparity in arrests, a long-standing issue for local law enforcement, continues today.

Authored by the Partnership for the Public Good, a local think tank, the study is intended to boost efforts at reforming New York's marijuana laws. Reform advocates say the costs of marijuana prohibition far outweigh the benefits, especially given the national movement toward legalization.

"It's shocking how many we arrest," said Sam Magavern, executive director of the partnership. "Mostly we're talking about young people who have the most to lose."

Rebecca Town, a lawyer for the Legal Aid Bureau of Buffalo, said Pennick is typical of the young black men who find themselves pulled over by police, often more than once, or even twice.

She still sees evidence of "stop and frisk" arrests in public housing developments and indicated local police often use marijuana as an excuse to make a traffic or pedestrian stop.

"It's often the suspicion of marijuana possession that gets the ball rolling," she said.

In Buffalo, according to the study, more than 2,000 people were arrested in connection with low-level marijuana crimes over the past five years but the numbers are dropping.

Last year, 231 people were arrested for marijuana possession in Buffalo, down from 555 three years earlier.

Magavern said the study shows that, despite the decline in arrests, the harm caused by them – young men losing job offers and teens missing out on education opportunities – falls more heavily on blacks and Hispanics.

The study also suggests that enhanced police enforcement in a community can lead to distrust and, ultimately, poorer relations between residents and police.

"You erode the relationship between law enforcement and the community, especially those with people of color," said Kassandra Frederique, state director for the Drug Policy Alliance.

The report also notes that studies on marijuana use show young white people, compared with young blacks and Hispanics, are more likely to use marijuana. And yet, the study found them at significantly less risk of prosecution.

"Everyone knows, if you're a young person in Clarence and you're smoking pot, you're not going to get arrested," Magavern told reporters.

Assemblywoman Crystal Peoples-Stokes, a Buffalo Democrat, is sponsoring a bill to legalize marijuana use among adults in New York State, and noted that several states, including nearby Massachusetts, have already done so.

"The war on drugs is lost," Peoples-Stokes said Tuesday.

The disparity in local marijuana arrests is not unusual, especially in medium to large-sized cities, and studies of other communities have found similar disparities.

In New York City, low-level marijuana possession arrests increased 10 percent last year and 85 percent of the people arrested were black or Hispanic, according to a study by Politico.