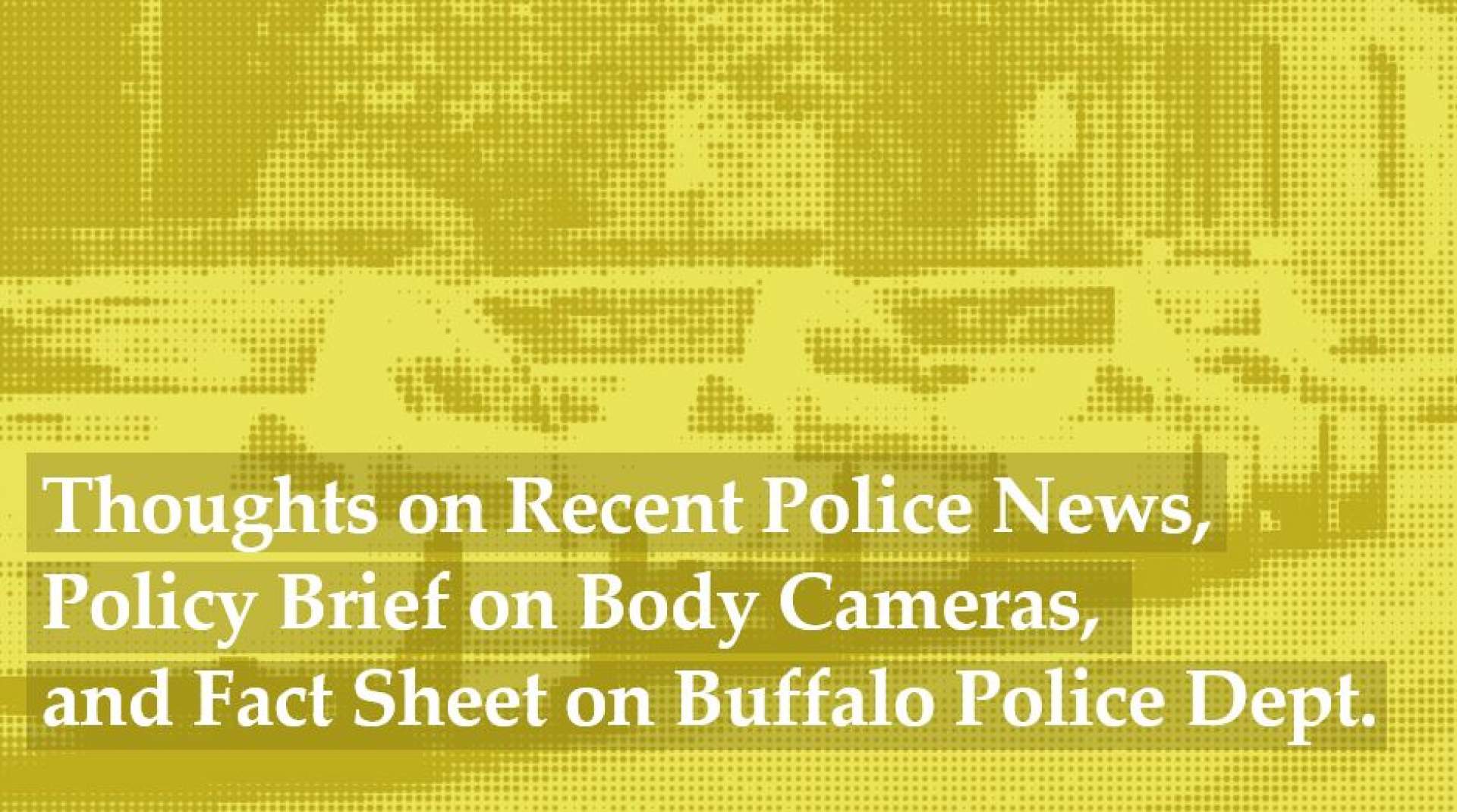 Recent events have underscored the importance of making changes to the laws, policies, and practices that govern policing in Buffalo. In recent years, PPG has published extensive research on policing and made numerous recommendations for reforms based on best practices from other cities. This week, we are releasing a policy brief on body cameras and a fact sheet on the Buffalo Police Department.

On December 17, the Buffalo News reported on a lawsuit filed against the police based on the actions of two officers in its Strike Force, who are accused of threatening and harassing a man who bought a house at the city's foreclosure auction. A video recording shows outrageous behavior by the officers. Apparently the police Internal Affairs unit sustained a complaint regarding one of the officers, but no information is available about how she was disciplined, and she continues to work in the Strike Force. This case raises further concerns about the culture and practices of the Strike Force and the closely related Housing Unit, which have been accused of many instances of misconduct and illegal action in recent years, ranging from unnecessary force, the unnecessary shooting of dogs, unconstitutional traffic checkpoints, and more. See this complaint filed with the Attorney General by Black Lives Matter-Buffalo for more information. It seems increasingly clear that one of the reforms needed is the disbanding of the Strike Force and Housing Unit - as part of a wholesale shift away from "zero tolerance" and militarized policing toward community policing.

Last week, the Attorney General's office released its report on the death of Wardel Davis, which the Medical Examiner classified as a homicide caused when an "asthma attack precipitated by the decedent's acute bronchitis was exacerbated by the physical interaction between the decedent and the police" -two members of the Strike Force. After finding "insufficient evidence to warrant any criminal charges" and noting that "the only witnesses to the physical altercation are the two BPD officers involved in it," the Attorney General recommended that Buffalo pursue independent accreditation and body cameras for all officers - two of the recommendations from PPG's 2016 policing report. But the Attorney General's report left many unanswered questions about the Davis case and the reforms needed in Buffalo.

Regarding the death of Mr. Davis, we have questions about each key decision the officers made: to stop him, detain him, search him, chase him, handcuff him and use violent force against him. At each stage, we wonder three things: 1) is the officers' account accurate?  2) were their actions legal?  3) if they were legal, did they reflect good policy and practice?

According to the officers, Mr. Davis told them that he had marijuana on his person. Given that no marijuana or other drugs were found on his person or at the scene, this claim is somewhat hard to believe. The officers give two reasons for using violent force, including punching Mr. Davis repeatedly in the face and putting him in what sounds like a chokehold ("Officer Parisi admitted to...placing Mr. Davis' head and neck in the crook of his arm"). One is that they thought he was trying to remove drugs from his pocket in order to swallow them. Given that no drugs were found in his pockets, this claim seems questionable. Also, while the Attorney General cites case law for the proposition that force may be justified if the suspect has drugs in his mouth and is trying to swallow them, the officers here did not claim that the drugs were in Mr. Davis' mouth, but rather in his pocket.

The second reason given for the use of force is that Mr. Davis was violently resisting them. Given that he had fallen on the ground, that there were two of them and one of him, that he was unarmed, and that he was having severe trouble breathing, questions arise as to how vigorously he was resisting them and as to what other options they had for resolving the situation. One officer's account claims that Mr. Davis kicked and punched, while the other officer's account does not. The only reported injuries to the officers were a sprained finger caused from grabbing Mr. Davis' hood, and a sprained wrist which seems to have come from punching Mr. Davis. If Mr. Davis had trouble responding to the officers' demands that he furnish his hands for handcuffing, could that have been because he was in the middle of an asthma attack and/or cardiac arrest, rather than because he was resisting them? The fact that the officers would not talk to the Attorney General unless they could be interviewed together also raises questions.

Even if the officers' accounts are true, it does not seem clear that all their actions were legal; and even if they were legal, it seems unlikely that they reflect good policies, practices and priorities. Did the Strike Force have reasonable suspicion sufficient to justify stopping Mr. Davis, and do they have reasonable suspicion to justify many of the other stops they make of pedestrians and vehicles? What is the mission of the Strike Force, what policies govern its actions, and why is it the center of so many cases of officer misconduct, illegal practices, and civilian distrust? Why does the City continue to arrest so many people for marijuana possession - decades after the State decriminalized it - and why, as we recently reported, are the overwhelming majority of those arrested young black men, when whites use marijuana as much or more as blacks? (Click here to view the Open Buffalo petition on making marijuana offences the lowest priority for police enforcement). Why does the City provide such little information about its policing, and why is it moving so slowly, where it is moving at all, toward meaningful reform?

When it comes to the Attorney General's recommendations, accreditation is clearly necessary and is in fact required by the City Charter. Body cameras hold real potential, but, as our new brief explains, simply adding body cameras may do nothing unless good policies are created governing their usage. We recommend clear requirements for when the officers must record footage, and real consequences for violations of those requirements. We recommend public disclosure of footage, with some carefully tailored exceptions to protect privacy. And we recommend true citizen engagement in the creation of the policies.

Furthermore, out of the 32 recommendations in our 2016 policing report, accreditation and body cameras are the only two that the City has committed to implementing. Unfortunately, the City may respond to the Attorney General's report by saying, "yes, we are doing those two things." In reality, much more is needed before trust can be established between police and community. Open Buffalo's 2016 survey of over 2,000 Buffalo residents found that 57 percent believe that the police do not respect people of color. We renew our call for major reforms, including community policing by all officers, implicit bias training, law enforcement assisted diversion, fix-it tickets for minor offences, and real civilian oversight.