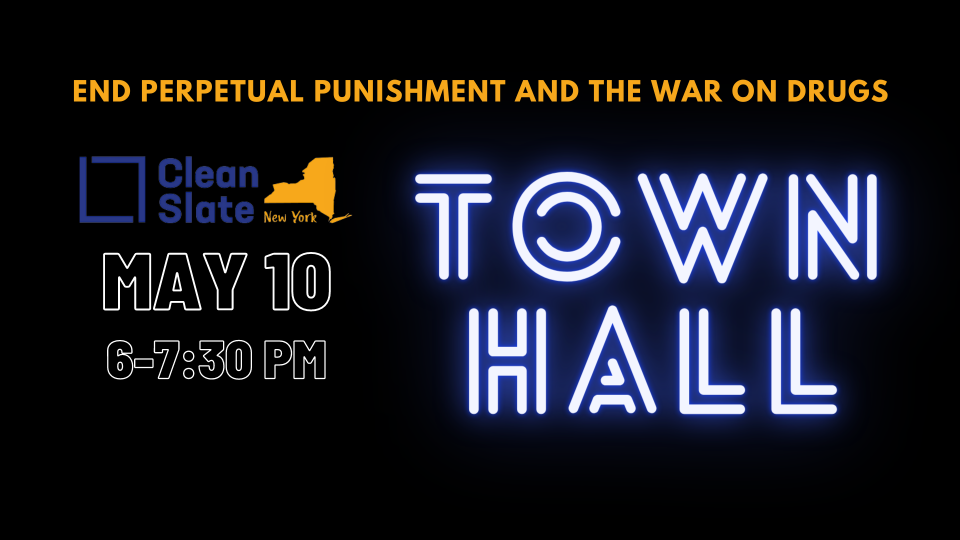 On May 10, advocates, organizers, and the directly impacted gathered across the state to call on state legislators to pass three critical bills to end perpetual punishment and the War on Drugs that fuel mass incarceration.

On May 10, advocates, organizers, and the directly impacted gathered across the state to call on state legislators to pass three critical bills to end perpetual punishment and the War on Drugs that fuel mass incarceration. Hosted by the Partnership for the Public Good Just Recovery Coordinator Tanvier Peart, the Clean Slate/Syringe Decrim Town Hall included panelists from the Clean Slate Campaign, Evergreen Health, Free the People WNY, the Center for Community Alternatives, and Students for Sensible Drug Policy.

Over 400,000 people are arrested on criminal charges in New York each year, with 2.3 million across the state living with a conviction history. New York State incarcerates people at a higher rate than the United Kingdom, Canada, and France combined — creating barriers to housing, jobs, and education. The Clean Slate Act (S1553A/A6399) proposes a 2-step process to end the perpetual punishment of a conviction record: first, automatically seal convictions for most civil purposes, like employment and housing; second, after a longer period with no subsequent convictions, automatically expunge convictions.

Harm reduction advocates continue to call for syringe decriminalization (S2523/A868) to increase access to and the frequency of people participating in exchange programs and decrease syringe use. New HIV cases and fatal overdoses are rising across the state during the pandemic, requiring a public health approach to drug use. The CDC highlights syringe exchanges are associated with a 50% reduction in HIV and HCV incidence. Decriminalizing buprenorphine (S2524/A612) would also save lives as it is considered a gold standard of treating opioid use disorder and has been shown to decrease overdose risk by 38%, according to studies.

With the historic passage of the Marijuana Regulation and Taxation Act (MRTA), legislation with an essential expungement component, legislators must maintain the momentum to address the harmful systems in place through a harm reduction and racial justice lens.

"Business as usual costs lives. Over-policing, over-prosecution, the criminalization of low-level drugs, and other unjust and archaic practices continue to keep people in a state of perpetual punishment that harms families and communities. Legislators have an opportunity to address the numerous barriers people who’ve served their sentences face, as well as the War on Drugs." Tanvier Peart, Partnership for the Public Good

"[The MRTA] sets the stage that we need to start legalizing and expunging the records of low-level drug offenses. Black and brown folks in New York State are most affected by these criminal records, and we need to expunge those records in a smart way. We have the momentum of the MRTA, and we need to keep going and push the bar even higher and tell New York State we need Clean Slate." Avishai Afek, Free the People WNY/Students for a Sensible Drug Policy

"New York right now has an application-based sealing law. Half of one percent of eligible people have gotten relief through that legislation. And that's akin to the number of people who've gotten relief under application-based laws in other states. When it is application-based, it privileges people who are already privileged — people who have access to lawyers or who can pay for lawyers to navigate complicated and cumbersome processes. What having an automatic bill would do is that once people become eligible after a period of time, if they don't have any new convictions, that would be the responsibility of the court system to seal and expunge their records." Katie Schaffer, Clean Slate Campaign/Center for Community Alternatives

"The implementation of the Clean Slate Act would help me out tremendously, and it would help out a lot of other people as well. I was a person who got caught up in crime at a younger age. From that point on, I had a record, and I still have a record at 62 today. It got to the point where I couldn't even get a job.

People do change, [and] Clean Slate would give people more opportunities. You have to open life back up to people. Give people a second chance, and that is what Clean Slate is about." Tony Bibbs, Center for Community Alternatives

The leading charge of arrest in Buffalo and other municipalities around Western New York and around our state is low-level possession of a controlled substance. We need to take these charges — low-level substance possession, possession of syringes, possession of paraphernalia, possession of buprenorphine — out of the scope of law enforcement and treat these as issues or symptoms associated with public health." Emma Fabian, Evergreen Health

"The reality is we can't say 'Just say no to drugs, just stop using drugs.' Abstinence-only approaches do not work for everyone. But we know what does work. We know this works because of decades of research. Access to sterile syringes significantly lowers one's risk of getting or passing HIV, Hepatitis C, or other types of infections or complications that come with injection drug use.

Syringe exchange programs are often a pathway to health care for people who are otherwise traditionally cast out of health care settings. Research shows that people who engage in syringe exchange programs are five times more likely to engage in treatment at some point, and more likely to stop using drugs on their own based on the goals set in harm reduction programs." Seanna Pratt, Evergreen Health

"I'm in recovery now. I used to be scared to death to work around with needles because I got arrested all the time. Police used to stigmatize me and call me 'junkie' and other names. I'm still a human being at the end of the day. It could be our family members, our kids. We just keep pushing people to the streets like they are bad. They're not." Ivette Chavez-Gonzalez, Evergreen Health