CBC Radio: "A gunman cost east Buffalo its only large grocery store - so locals are banding together to keep people fed" 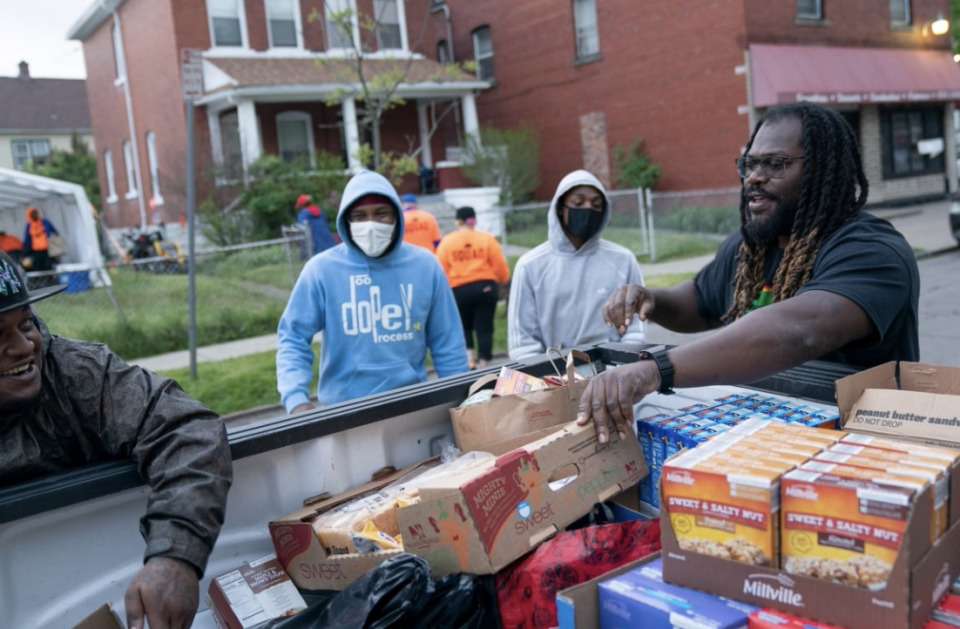 This article accompanies the May 19th, 2022  episode of CBC Radio's show The Current with Matt Galloway.

Listen to the full episode here and read the transcript here.

Near the Buffalo, N.Y., supermarket where 10 people were killed in a mass shooting last weekend, a volunteer fired up a grill Tuesday night.

"We're going to cook at least a few hundred hamburgers, a few hundred hot dogs," said Michael King of the Buffalo Peacemakers, a group that aims to mediate conflicts among local youth.

"I'm here all day, just trying to help — whatever I can do to help out," he told CBC Radio's The Current.

King's cooking brought comfort to locals who came to pay their respects to the victims, but it also served a more practical purpose — feeding a community whose only grocery store is now a cordoned-off crime scene.

The mass shooting on May 14 has shuttered the local Tops Friendly Market while officials conduct an investigation, with no word on when it might reopen.

Authorities have called the attack a case of "racially motivated violent extremism." The accused shooter, an 18-year-old white man, drove about 320 kilometres to reach the predominantly Black neighbourhood in Buffalo.

"The hate crime in and of itself is horrific," said Janelle Brooks of Slow Roll Buffalo, a non-profit that organizes free bicycle tours of the city. "But for the crime to now impact our access and ability to [get] food and necessities for so many people … that's a big deal."

Living in a food desert

Partnership for the Public Good, a community-based think-tank that advocates for policy solutions in the Buffalo-Niagara region, has calculated that nearly 22,000 people in east Buffalo relied on Tops as their closest supermarket.

A 2018 policy report from the group established that Buffalo's east side is home to some of the city's most impoverished neighbourhoods, and has the highest number of food deserts. The report also found that "Buffalo's African-American residents are six times more likely than whites to live in a neighborhood without access to a grocery store."

The nearest comparable store to the Tops is about an hour away by bus, which means locals could face weeks or even months of food insecurity. That's why community leaders and organizers are stepping up to help.

Near Michael King's grill, volunteers were handing out boxes of fruit and vegetables to passing cars and manning tables laden with clothing, toiletries, household essentials — even sweets for the kids.

"We've got to have some candy for the kids, just to put a smile on their face," said Pastor Joyce Badger of Bethesda World Harvest International Church. "Our church is here in the community, but our heart is here, too. So we're going to put our money where our mouth is."

'A city of good neighbours'

Local organizers have been teaming up to deliver food directly to residents, including Alexander Wright, founder of the African Heritage Food Co-op, which distributes fresh produce to local areas suffering food insecurity.

"I think we've given out maybe 200 bags today to people, and they were good bags," Wright said. "You had most of the food groups in there, you had healthy stuff — you know, they threw a few Girl Scout cookies in there, but we're not going to complain."

One of the other organizers Wright has teamed up with is Allison DeHonney, who runs two food-related non-profits: Urban Fruits and Gardens and Buffalo Go Green.

Together, they worked with a local councillor on "gathering names, gathering phone numbers and addresses of folks that are going to need delivery," DeHonney said.

One of their recipients, east Buffalo resident Kalil Bass, was grateful to receive a box with milk, cereal and fresh produce. He's been talking to friends about how to help older people in his area get rides to stores when they need them.

"This is Buffalo, New York. We never expected it to hit us, but we should always be prepared — you know, we shouldn't let this divide us," he said. "It's all about helping, and this is a city of good neighbours."

Locals 'scared to go out'

Bass said he hasn't gone down to the area where the shooting occurred, because things are still too tense.

He's not the only one who's reluctant. The company that owns Tops has started a shuttle bus to its superstore in north Buffalo — but uptake was initially low.

"A lot of people are scared to go out," said east Buffalo resident Diane Turner, adding that her neighbour's teenager was missing school over fear of another attack.

The reluctance to go elsewhere is compounded by how much local residents relied on this Tops as a community space as well as a store — particularly seniors, Turner said.

She said one 80-year-old friend will only shop at Tops, and might spend hours in the store "because she's talking to this one and that one, because she hasn't seen them in so long."

Turner thinks the shuttle service, which is scheduled to run for the next couple of weeks but may be extended, will end up being very important for locals.

Tommy Seay, who drives the shuttle, thinks seats will fill up as pantries start to empty — and points out that the same journey on public transport would take three separate buses.

Alexander Wright said the lack of amenities in east Buffalo dates back to the "white flight" of the 1950s.

"When the Black southerners were coming up here escaping Jim Crow [laws], the white counterparts who were here got up and moved to the suburbs," he said. "When the white folks left, the divestment began. The banks left. The grocery stores left."

Bigger stores were replaced by corner stores, which don't offer the same range of nutritional options.

For DeHonney, part of the solution to food insecurity is helping people grow their own.

She runs an urban farm and a greenhouse in the city, one of 14 urban farms built on vacant lots around Buffalo, where condemned buildings have been demolished.

She said those farms are "an integral part of the food system" in Buffalo, and the situation now wouldn't be so bad "if there was another grocery store, if there were options."

One of her long-term goals is to help educate people on how to grow their own food — and find longer-term solutions to food access.

"We operate in the food system on a put-out-the-fire basis, and it just can't continue like that," DeHonney said.

"We just went through that with COVID … and now we have this crisis," she said.

"So I'm hoping that this community, the state, our country, realizes how fragile this system is."

Read the referenced report, 'A City Divided: A Brief History of Segregation Buffalo" here, along with PPG's article on the number of residents who may have dependent on Tops for groceries, here.